At the start of WWII, the German army was one of the more modern forces in the world. They had mechanized infantry and artillery transports as well as loads of tanks. This was the picture painted by the propaganda department, and in many ways it was true. Sure, the newsreels didn’t show the many horse-drawn artillery pieces and failed to mention the fact that most of the tanks in service were little better than training or reconnaissance vehicles, but that’s just being picky.

As it turned out, it WAS just being picky! Despite their qualitative shortcomings, these early weapons were more than enough to smash through Poland, the Low Countries and France! Deft maneuvering and surgical application of force was the key, and one of the most important pieces of the puzzle was the Panzer II.  The Panzer II was not well-armed (it had a main armament of a 20mm cannon) and was only lightly armoured. However, it was available in numbers, and it formed the strength of the Heer (army) until the Panzer III and IV could be deployed.

Due to its availability and widespread use through all early theatres of war, there have been a good number of Panzer II kits over the years. One of the perhaps lesser-known is that offered by Matchbox in 1976 in the typically awkward scale of 1/76. Of course, that’s the one that caught my eye, so let’s take a look, shall we?

Before starting, I have to say that while I have an interest in armour (I have some books and replicas) I’ve generally eschewed building armour kits. They always seems so picky, and piece-y, with so much aftermarket resin and photoetch. I never really felt the need to build one. Until, that is, I ran into Matchbox tanks. There, my absolute lust for Matchbox kits collided with my more-than-passing interest in armour and motivated me to try something new.

If you think Matchbox planes have got the box art going on, then step back, good friend! The Matchbox armour kits from the 1970s and early 1980s will blow you away. I’ve NEVER seen box art this awesomely visceral, this palpably dynamic or this apocalyptically action-packed on any kit from any era. The art on the Matchbox armour kits just sucked me right in, and I HAD to buy every single one I could get my hands on. Thank goodness the guy at the local flea market had a goodly number of them to help me with my newfound addiction! 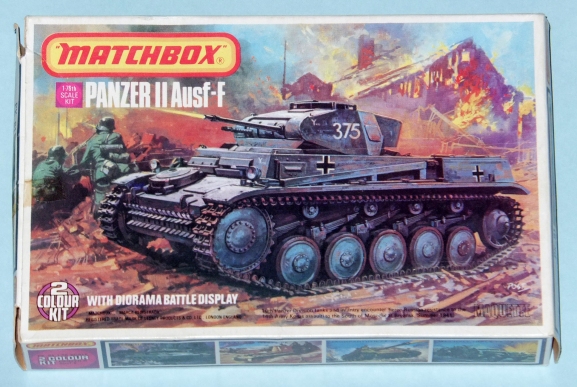 BOOM!! If this doesn’t make the meager Panzer II look badassed, nothing will! Matchbox, you rock box art like a boss!

The box of the Panzer II shows a grey machine smashing its way through Russia. With its 20mm cannon blazing, the tank dominates the foreground, while in the background German troops and other tanks advance against a backdrop of burning farm buildings and a smoke- and fire-filled sky. I mean, it’s art. It’s really art. Not just box art, but ART art. The composition of the picture, the way it’s painted and the colours used look more like something you’d see in a book of WWII paintings. It has a very propaganda feel too it, too; the power of the Wehrmacht is on clear display here, and that’s made all the more ironic by the fact that it’s all lavished on a has-been, stopgap, barely-good-enough-for-reconnaissance  tank! One thing I love about the Matchbox armour from this era is that there is a little description of what the box  art scene depicts; this makes the model not only visually exciting but serves as a good bit of a history lesson too!

On the back of the box is a two-colour drawing of what you get in the box. Of course it’s two colours – it’s a two-colour kit! In typical Matchbox fashion, the Panzer II comes in two colours, three if you count the black for the tracks (which they don’t). In this case, the machine is moulded in sandy beige and a more goldy-beige. The idea is to be a desert version of the tank, even though a Russian Front version is shown on the box. The side of the box shows a three-colour paint scheme, so there’s lots of choice.

Here’s another possible scheme. Is it legit? I assume so, but I’m not guru on armour schemes. Looks cool, though.

One interesting thing (if you’re not expecting it) is that the tank is shown with some figures and on a base with a blown-out wall behind it. That’s right, that’s in the box too! One big thing with Matchboxes was that they gave you a mini diorama base so that your little tank had some context to sit on or in. I love this! Sometimes you get street scenes, sometimes you get desert sand dunes, or railway tracks, or bridges… this one comes with some kind of shot up Middle Eastern building! Instant fun!

It’s “invasion in a box”! Not only does Matchbox give you the tank, they give you some context too!

Many of the kits I got at the flea market were still sealed! This was great; I knew that the decals and contents would be intact. Some were open, though, so I did a quick check to make sure everything was there. In every case, save one, it was. Of course, the Panzer II was the exception to the rule. It was missing the decals and the diorama base. My heart sank. I loved the look of that base, and I really wanted to try my hand at doing the building. Still, at $3, I couldn’t really complain, so I bought it anyway. I figured the tank will make a good trial for me to learn some techniques and try some things out.

What was left in the box were two racks (one in the lighter, one in the darker colour) containing the tank itself and the two figures (okay, at least I got SOMETHING extra) as well as a black rubber “T” holding the very thin “rubber band” tracks. There were no decals, sadly, although there aren’t that many in this kit looking at the decal plan on the instructions.

Other than the decals and diorama, this is what you get. There are a lot of wheels, but the kit is quite simple, really.

The first thing that hit me was that the kit didn’t remind me at all of a Matchbox aircraft kit. Whereas their planes are quite simple and crudely detailed, with oversized panel lines/valleys and not much surface detailing, this little Matchbox tank has real fineness to it. There is good surface detailing on this little model, including fine rivets on the sprockets and road wheels, as well as fine grating on the engine compartment and nice reserved hinges on various hatches. It is NOT at all what I was expecting. I have a Fujimi Hetzer in the same awkward scale, and it is a bit finer, but for a Matchbox this blew me away.

It seems like there were totally different design departments at Matchbox’s model division; there is almost no way to compare the approach taken to their armour kits with that used in making their aircraft ones. I was so blown away by how good the Panzer II was. Sure, it’s not a Tamiya, but for a Matchbox it deserves serious props; I never expected to use “fineness” and “Matchbox” in the same sentence, I can tell you that!

The leaf springs on the hull sides are nicely done, and those rivets aren’t overstated!

Grilles and hinges and hatches: Oh My! Look at the fine grating on the fender, as well. This is NOT what I expect from Matchbox.

This is likely a first run of this kit and the moulding is pretty good. There are some seams, of course, but that’s a given. There’s no real flash on this kit, and the hardest part will be trimming off and sanding the TINY return rollers, I think. I’m not used to armour yet, so I was surprised to see how small all the pieces were. Of course, this issue is magnified (pun intended!) by the fact that the Panzer II is basically a “kiddy tank” to start with.

I must admit I’m worried about handling the rubber band tracks. However, I do like the nice patterning on the tread blocks, and the Matchbox method of attachment blows the old “Melt the pins with a hot knife approach away. The Matchbox way is to leave a gap in the track so that you can “thread” the other end through. The other end has the missing chunk of track in it. This approach doesn’t stay together well when you try and just loose-fit them, but once you put the track under tension, like when it’s on the vehicle, it holds together great!

The instructions are very small, with only a few steps. However, that’s because there’s not a lot to this kit; it’s simple and straightforward with no unnecessary complications. The instructions are well-laid out and will be easy for anyone, including armour neophytes like me, to follow.

This should be easy, right? The instructions sure make it look that way!

Okay, I can say it now; I’m addicted to armour, so long as it’s Matchbox 1/76 (or equivalently cool stuff from the same time).  This little tank looks like it will be a blast to build, and make a neat canvas for trying something new and different.  Even if the kit isn’t the greatest, it is easily the most detailed Matchbox kit I’ve ever handled, and it has a level of detail commensurate with its size.

This kit will build up small, so it won’t take long to do or much shelf space to display once it’s done. It’s a shame it doesn’t have a diorama base with it, but the next one I build will. Being small is a good thing; an army will only take up the same space as a moderately-sized 1/48 plane!

I give many kudos to Matchbox for their armour offerings. They really are fantastic. They’re a great introduction to the subject for people like me with an interest, but not an obsession, in armour. They’re also very educational. Not only does the box art give you a history lesson, but by building and comparing a number of these little guys, you can really get a feel for how tanks evolved during WWII. For that alone the Matchbox armour is a wonderful addition to any modeller’s stash.

The pieces of the Panzer II are pretty small, and the attachment points are quite heavy, so for beginning modellers it could be a challenge to get the parts safely off the racks. Also, those with fists of ham should be careful of the small gun barrels and muffler, too. Overall, though, this is a great kit to introduce most levels of modellers to the world of armour kits. How deep you want to go is up to you, but Matchbox’s little tanks are definitely the “gateway drug” to get you started!