All Your Base are Belong to Santa!

Here it is; all the components of the Gundam Christmas Diorama are finally united on their new base!

There’s that saying that something is greater than the sum of its parts. In some cases, that’s true. When it comes to modelling, that’s quite often the case, actually. However, sometimes it’s one missing piece that is required to tie everything together and give the final product that “kick in the pants” that it needs in order to truly achieve wholeness. Now, when it comes to something as oddball as a Gundam Christmas Diorama, that missing piece can be a little bit harder to find.

What does it take to make a Santa Gundam, a Reindeer B’Cue, a Sled Jabber, an Elf Mech and a Type 74 Present Truck all come together? Each piece is interesting on its own, but clearly they are meant to go together. I built them with the idea that they’d all be displayed on one shelf come Christmas time. A particularly good  spot in my family room is on top of one of our old video stands. It’s big enough to hold all the pieces, but just having them sit there seemed somehow incomplete. It was just a bunch of holiday-themed MS kits. It lacked unity. 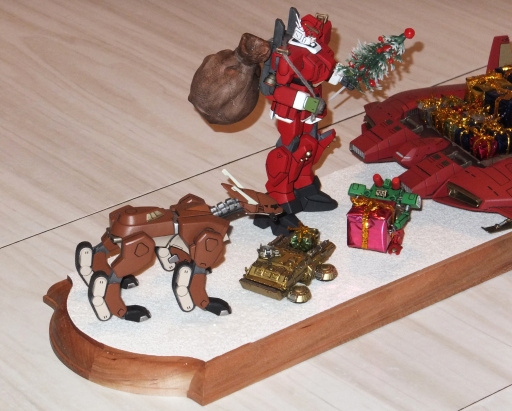 This view from the left end shows how the Reindeer B’Cue, the Type 74 and the Elf fit into the picture, with the Santa Gundam in the background.

That’s when it occurred to me that maybe it was the surface upon which they were standing that was letting my little Christmas menagerie down. I needed some ground cover to set them apart from the rest of the shelf. I didn’t want to use cotton batten, because it’s a bit too lumpy and I didn’t want things to be unstable. Heaven forbid that the Santa Gundam should end up doing a faceplant on the carpet because it had uneven footing!

Last year, all I had were a couple of napkins that had a snow pattern on them. This was better than nothing, and did help the Santa, Reindeer and Sled stand out. (The other two weren’t made yet.) However, once I decided to add the Elf and the truck, it was obvious that something more permanent and decorative was required. This is when I decided to make an actual base for the kits; for the first time ever I decided to take the plunge into create a simple diorama base and a tiny bit of winter groundwork!

I chose to use a pre-cut and nicely finished piece of wood from my local Michael’s arts and crafts store. They sell all sizes and shapes of wood with pre-bevelled edges, nice and smoothly sanded. I’m not a wood worker, and I didn’t want to have a rough-hewn plank as a base. The nice thing was that I didn’t even have to paint the base. The natural wood colour was perfect for my decor and already nicely smoothed. All I had to do was find a piece big enough and then put some snow on it!

Test Fit! This was a dry run to see if everything would fit on the base acceptably. The Sled Jabber is a bit big, and hangs off one end, but you can’t tell from here. Note the Elf and Truck aren’t even painted here yet!

A closer look at my original thought of the arrangement. Compare it to the finished product and you’ll see it’s not quite the same. I don’t know why I left the middle so bare on this take.

Viewed from just over the Sled Jabber, you can see that the placement of the Type 74 and the Elf Mech are quite different here than in the trial photo above. Nothing’s glued down, so things may change year to year as I deploy the entire set only at Christmas.

The thing with fake snow, as I found out, is that you don’t need a lot. I didn’t know how much I’d need, but I wasn’t about to go and buy a whole jug of the stuff from the local train shop. Instead, I went back to Michael’s and bought a Woodland Scenics winter diorama kit. This has all kinds of stuff, including fake ice, snow, applicators and base glue. I had a 50% off coupon, too, so it made it so cheap as to be worth a shot! I was worried I’d be short on snow, but as it turns out, it was more than more than enough. (Yes, I know I repeated the “more than”. There was a lot of snow…)

I masked the edges of the display base with painters tape and laid down some Colorplace primer. When that was dry, I applied Colorplace flat white. I then applied a coat of the white-coloured glue. Before this dried, I shook the snow over the base, covering it. If you’re going to do this, do it in a container, to keep things under control. I used a box lid, and the cleanup was super-easy. The fake snow is very light and gets EVERYWHERE if you’re not careful. 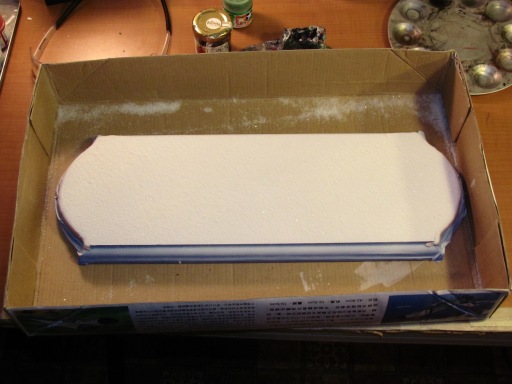 Use a box, or be forever vacuuming up fake snow! Believe me, a nice container like this saves you tonnes of headaches later!

Once the glue was dry, I simply shook off the excess snow and had a look. I was amazed at the effectiveness of the snow. It really looked deep and 3-D, even though there was only a thin layer! The problem, though, is keeping it down and keeping it clean. It’s not like I can dust something that is as fragile as the fake snow. I know some people have suggested doing a trick with hairspray, but I had one other product I wanted to try. 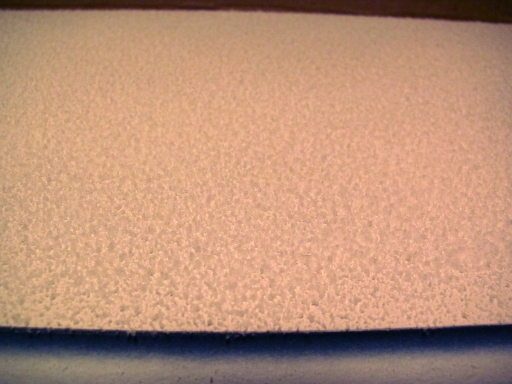 This is a closeup of how the snow looks on the base before coating. It’s amazingly fluffy looking, and keeping it from just matting down into white carpet is tough.

Often, on cold nights, snow seems to glitter. This glittering is usually simulated using glitter on mass-produced Christmas Village pieces and other such products. I didn’t have glitter, I didn’t think. However, I did have something called “Crackle Finish” from Delta Ceramcoat. Since that’s the same brand of stuff I use for flat coating, I figured I knew it was airbrushable, so why not use it to nail down the snow. I didn’t know what “Crackle Finish” meant, but maybe it would have some shine to it, or maybe it would be pearlescent. Either way, it was worth a go, right?

Well, it turns out that Crackle Finish is basically a semi-gloss to matte medium with glitter in it! I bought it years ago on a whim, and how it was going to be exactly what I needed. You want to talk about fate? Yeah, that’s what I was thinking too! Unfortunately, the glitter in the coat makes it VERY tough to airbrush. Glitter doesn’t like to go through the fine orifice at the end of an Anthem 155, so high pressure is needed to blow it properly (about 25 PSI).

What I did was “rain” the Crackle Finish down on the snow-covered display. To airbrush it directly at that pressure was asking for trouble; either the air would blow the snow off the base, or the coat would land so thickly that it would obliterate the snow effect. By raining the coat down from above, it was just like adding another layer of snow, essentially, except this one was sticky and, when dry, would be very hard and very durable.

I soaked the surface of the base several times until everything looked wet. When the Crackle dried, though, it was matte-ish, with a nice dispersal of glitter. I was glad to see there wasn’t a tonne of glitter in there; there was just enough to tastefully set off the base. I can’t think of what else I would use this stuff for, but if I ever need another Christmas base, I’ll definitely do it this way. I guess I had better get my thinking cap on, right?

If you look carefully, you can see the odd greenish reflection of a bit of glitter. This is not easy to photograph, but looks very nice in real life. Click on the picture to make it bigger and see if the glitter jumps out at you then!

If you’re still not seeing the glitter, let this false-colour image help you out. The bright spots are where you’ll find glitter on the picture above. Again, clicking here makes it bigger.

Upon unmasking the base, I found I had a nice, festive and amazingly professional-looking display base for very little capital outlay and not a lot of effort.

Now, carefully placing the Christmas Team upon the base, I found that I had a decoration that really “popped”. The groundwork completes the set and then some. It’s not something you notice when it’s there, but it sure is something you notice when it isn’t! Now, complete with the base, the Christmas Team is on proud display on the video stand, right where it belongs. Of course, it’s only there for the Christmas season. Like everything else, when the New Year sounds, the Gundam Christmas Diorama will disappear. However, it will definitely be back next year. 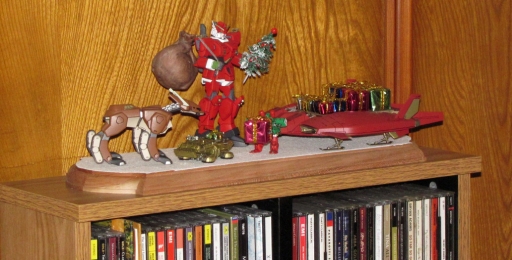 In situ! The Gundam Christmas Diorama is now officially done, and is working hard to bring cheer to all through high technology war machines!

Merry Christmas to All, and to All a Good Night! 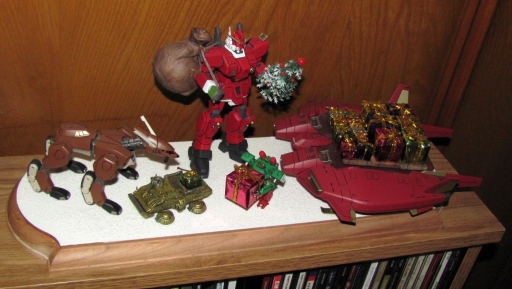 Another view, this time from above. Note how the wood on the base matches the CD/video stand perfectly. Sometimes, it’s better to be lucky than good!