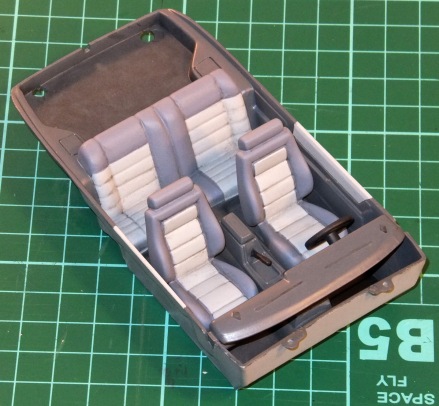 Cloth or leather: it’s your choice. Well, it was in the real car, but in the Monogram SVO, the choice was made for you: Cloth. This is the completed interior bucket, replete in it’s spectrum of greys.

Before even choosing a colour and staring the body and chassis, the Monogram SVO’s interior can be done. That’s because the SVO’s interior was the same for all versions, at least as far as I can tell. Like many sportier cars in the ’80s, the SVO could be had with either leather or cloth. Looking at the pattern on the seats, it is clear that this particular kit is made with the cloth interior. Generally, the interior is passably cast, although carpet texturing is weak, and there are a few major problems with the sides of the cabin. They’re rather featureless, and in the rear, one part that is moulded sticking out from the wall should actually have been recessed. Oops…

The pattern on an SVO’s interior is very, very odd. Whereas normally the bolsters are one colour and the insides another, that is not the case for the rear seats. Thankfully, I found pictures on the net of an SVO interior, because there’s no colour callout in the instructions, and the rear seats don’t really make it easy to guess how the colours are going to be split up. The correct answer is across and down, like a letter “T”. 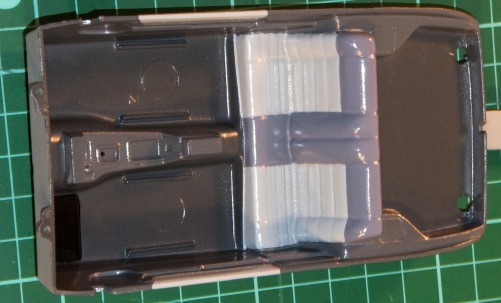 That’s a weird pattern for the seat colour, eh? This shows the glossed, but unpastelled interior bucket. The next step is to flat coat it, to make things look like fabric!

It should be noted that the inside of the SVO was grey. In keeping with the ‘80s traditions of boring interiors, everything is some kind of grey plastic or a bit of grey cloth. The carpet should be the darkest grey, so I used MMA Schwarzgrau for this. I did try to pastel the carpet to bring out the nap, but it was only partially successful. Thus, I put a lot of the dark grey pastel on, and tacked it down with flat coat. Once this was dry, I drybrushed the Schwarzgrau back over it, and this gave a convincing-enough carpet effect. 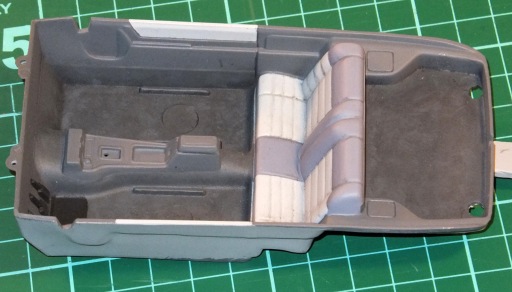 Here’s the interior bucket after the carpet has been “carpeted” with pastel and drybrushed highlights. Note too that the Gunship Grey “plastic” parts have been “vinylized”.

I used MMA Gunship Grey for the plastic parts and MMA Light Ghost Grey and F-15 Dark Grey for the cloth bits. I used some pastels to highlight the contours in the seats; by putting in a bit of “forced shadow” the seat looks much more realistic. The seats and carpet were flat coated, and the plastic bits were given a once or twice over with a satin coat made using Future, water and Delta Ceramcoat Matte Urethane Varnish. I call this “vinylizer”, because it makes things look like automotive vinyl! 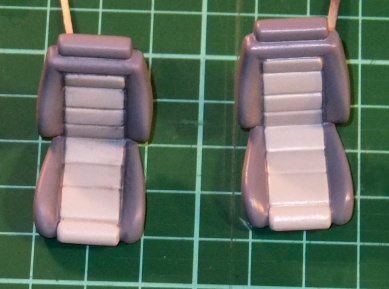 Here you can see the difference between a pastelled seat (left) and a plain seat (right). The pastel adds a bit of “forced shadow”, and makes things seem more realistic. Too much, though, will make the seat look dirty!

Again, because it is a reissue, the decals on this kit are far better than those that would have originally come with it. An example of how this helps things is the dashboard. The gauges are indeed moulded with raised detail, but it’s a bit murky and hard to see. There are decals, though, for all 6 of the dashboard gauges, and these look fantastic when installed. I’d recommend them to anyone building the kit; the really add a lot of life to an otherwise somewhat dull control panel!

The dashboard might be all grey, but the decals break it up with their red and orange details. A nice touch that was likely not included with the original kit!

The interior bucket mates to the chassis, and has the inside of the transmission hump with it. Thus, it is important to make sure that any areas on the underside of the bucket that might be seen were, in fact, primered properly. If you go to build this model, you should be very careful with this. If you think it won’t show, it will. This is a surprisingly airy kit! 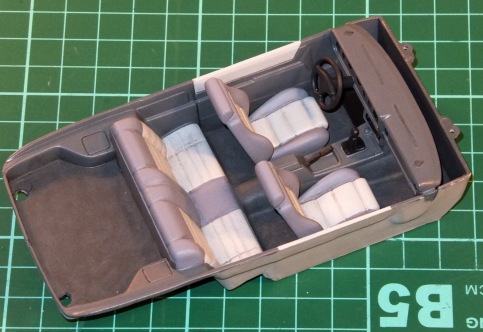 Another view of the completed interior. If you look closely, you’ll see that the driver’s seat is pushed further back than the passenger one. This is likely how most SVO interiors were arranged.

← An Astute Buy? Depends on who you ask…
From the Bottom Up! →