Citation Update 1: Body (not to be) in White

For the most part, the Citation notchback is not one of those cars people remember fondly, if at all. Most people opted for the hatchback, preferring its econoboxishly-utilitarian nature with a hint of sportiness to the clearly stuffy notchback. Thus, when it came time for people with a yearning for “high performance” to step up to the X-11, most chose the hatchback. In fact, there are several years (I believe  ‘81, ‘82 and ‘85) in which you couldn’t even GET the X-11 as a notchback! Thus, when I came across the Monogram “Lowriders” version of the X-11 Notchback, I was shocked. I knew there was a Citation kit, but for it to be a notchback made it really cool.

I’m sure you’re not surprised that I actually prefer the notchback styling. I believe in the three-box design for passenger cars, and I think they just look better that way in most cases. The Citation fastback, to me, screams “welfare econobeater”, whereas the notchback says “trying to get economy while still not succumbing to import-driven styling trends”. It’s a minor difference, to be sure, but to me it’s important.

Just because I was overjoyed at having a notchback to build doesn’t mean I wasn’t ready to be objective with the kit. To be fair, there are several problems. The first is, as I said in the OOB Review, was that there wasn’t an ’81 X-11 notchback. So, the first issue with the kit is to determine exactly WHAT YEAR of car it is. Doing copious research on X-11s is hard, because most people don’t care, and there are very few left. (This is, in fact, a direct result of their dire build quality and reliability issues. Even if people WANTED to keep them nice, the car itself often impeded their efforts!)

The problem is that Monogram gives you the striping for the ’80 (as well as decals for later years’ models), as well as wheels that suit both the ’80 and later models too.  However, the side vents they give you were only for the ’80, the single exhaust tip is for an ’80 and the small, 2nd Gen T/A-like “sport mirrors” are also for an ’80. I thus figured I could build this car either way,  there’s really not much difference between any of the years anyway.

However, I did find one thing that proved, beyond a shadow of a doubt, that this kit was really only supposed to be an ’80. That detail is the “Citation” writing on the front fender. On all post 1981 Citations, X-11s did NOT have this badge, instead the little “medal” symbol was on the B-Pillar. Since this is a notchback, and there is no ’81 notchback, that means that the car is a 1980 version. However, the ’80 X-11s are even geekier than later ones. They still had chrome bumpers and grilles, chrome trim on the windows and fender lips and weak-looking wheels. Since I don’t like the ‘80s, and the black side stripe decals limit the number of colours I could do, I decided to just say “Bollocks” to the ’80 and make this something else.  That meant one of the first things to do was sand off the fender badging. Sadly, there’s a decal for this, but not for the B-Pillar badge, so my finished car will be debadged, I guess. Also, there’s no “Chevrolet” writing on the trunk or as a decal. Weird and wrong, both… 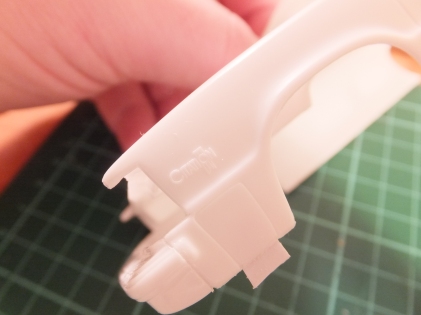 This shows the air dam locator tab I made, as well as the “Citation” badge on the front fender. This is the best indication that the kit is, indeed, a 1980 X-11.

Thank You, For Your Support!

Like most American car kits, there’s very little in the way of positive location for things like bumpers and spoilers on this model. There are very fine locating tabs, but they don’t have the meat to really help out, and the body sides aren’t thick enough to help with the task of holding on the bumpers against accidental bumps. To “toughen things up” I cut small pieces of sheet styrene and laid them over the backs of the body/bumper junctions. I them melted them in place with glue, essentially forming a “welded” support. For the front air dam, I did the same thing, positioning small sheet styrene tabs at the base bumper to locate and support the dam at both ends.

Surprisingly, the trunk’s lip spoiler is moulded in, which I thought would be a good thing. It is, but it also gets in the way of sanding down the VERY PRONOUCED and VERY WRONG seam in the middle of the trunk. I’ve never seen a Citation with a seam like this, so I was pleased to get it off the car. 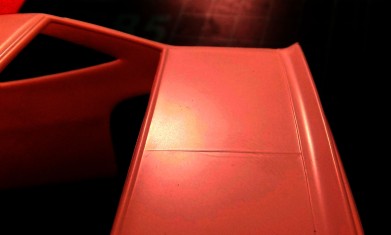 The colour adjustment is terrible, but it’s necessary to show the seam down the trunk lid. That had to go…

Another area that is devoid of a.) good engineering and b.) good support is the tail light module. The tail lights come moulded as a single piece of clear plastic “glass”. These include the licence plate holder for the middle of the rear end. Clearly, these will have to be painted, since there are large injector circles in the middle of the backs of the lenses. Huh. To make matters worse, there’s nothing supporting or locating the tail lights to the car save for the lip of the licence plate holding area and the thin edges of the wrap around tail lights. I don’t see this working well… 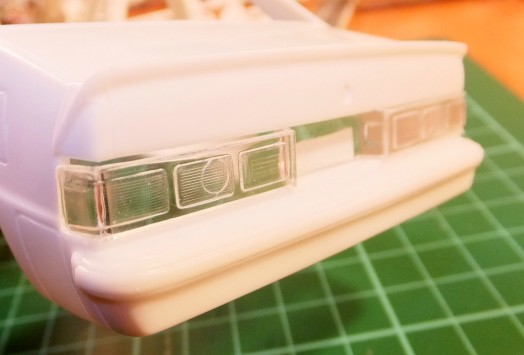 Fail. Here you can see the support for the licence plate holder area (through the clear part) as well as the clear lenses. Note the injector circles and complete lack of location and support for the lights! The fit’s not really all that great either, when you look at it, is it?

To cure this, I first cut a piece of sheet styrene and mounted it to the bumper behind were the licence plate holder goes. This at least prevented the tail lights from flexing inwards at the middle. However, this wasn’t enough, since the fit of the tail lights and the body is not very good, I knew I’d have to have something to glue the lights to! Using some 0.1” sheet styrene, I cut a part out that would support the tail lights all the way along, including wrapping around the side. I glued this into the body and once it was dry, and I test fitted the lights, I found there was no movement at all!

Here’s the support piece for the lights. I shaped it by literally bending it behind the tail lights. 0.01″ Styrene creases very easily! 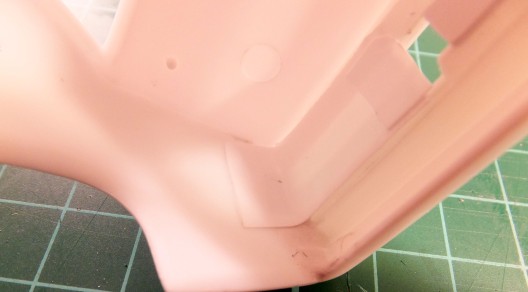 Here’s the new backing plate glued into the car. A white body actually makes no difference since I primer my cars anyway, but it sure makes taking good photos difficult!

One other piece that needed work was the firewall. It was difficult to determine how the firewall would locate to the body’ there weren’t any clear places to attach it, and I couldn’t tell if it went under or in front of the cowling. After much test fitting, I determined it went under the cowling, but of course, it didn’t do it well. There was a ‘low spot’ in the cowling that was holding the firewall too low, preventing the chassis from properly engaging the body. I marked this area with black marker and proceeded to sand it down until everything fit. 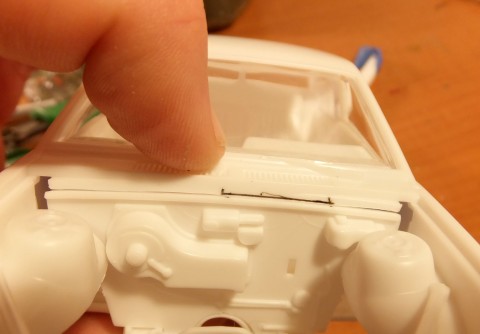 Nice work Monogram? Of course, they could have been accurately reproducing GM’s prints in this case, too…

Trying to find out about colours for Citations was made a bit easier by finding the brochures for the cars on several internet sites. I looked at brochures for 82-85, figuring out what year to make my car. I eventually chose 1983; it had the full black grille and bumper treatment with black around the windows and no chrome anywhere, which was good. However, so did the ’84. So what, then, is the lure to make it an ’83? The answer, maybe surprisingly, is “Light Fern Metallic”.

This was a colour listed in the 1983 brochure as being available on the X-11. It wasn’t listed for any other year. I couldn’t even FIND a picture of a Light Fern Metallic” Citation, or GM of any kind! Thank goodness for the folks at www.modelcarsmag.com; someone on their forums was able to give me a picture of a Caprice in the Light/Dark Fern Metallic two-tone, and it also had the “Light Fern” interior! Since that was the only interior option for the Fern X-11, this one picture, provided by John Goschke, gave me everything I needed! I set my heart and mind to building what might be the rarest Citation of them all (other than one that still runs): a Light Fern Metallic 1983 X-11 Notchback.

Have you ever seen one?

You will, when I’m done!

Next up: The powertrain, a misnomer if there ever was one!