If you’ve ever read anything on this site, then you know full well that I love the odd and unusual, both in terms of subject matter and the maker of the kit. While my tastes do tend to run to the esoteric, I’m not above picking up kits of more mainstream subject matter. As proof of this, I do have models of the Spitfire, F-15 and non-loser cars like Trans Ams. However, those types of kits are far outweighed in my stash by Luft ’46, ungainly two-seaters and feeble early jets. It’s just what I do.

Why, then, you might ask, do I seem to have so many Corvettes? I don’t really like Vettes, as real cars (except for ’68-’70 and ’80-’82)and generally they’re considered cool and desireable; a far cry from the Pintos and Horizons I usually collect. Well, I think there’s a few reasons for this, but it comes down to the fact that most of the Corvette kits I have are of either weak, unloved or crazily customized (thanks, MPC!). They’re not the Vettes most people think of when they think “Corvette”. On that note, I’m still looking for a simple 1/32 Vette, too, so I can do a “Chia-Vette”, but that’s another story!

The last thing, then, I thought I’d buy, would be another Corvette kit, especially one of a “cool” year. However, that’s just what happened! On one of my Golden Horseshoe Hobby Shop runs I came across a Corvette kit I’d never seen before. It was sitting with a bunch of other kits that were of absolutely no interest to me at all, but something about this one drew my eyes and made me pay attention. To my surprise, the kit was made by a company I’d never heard of (at the time) and it was still sealed!

That kit was the Palmer 1970 Corvette Stingray Hardtop. Not only was it clearly from the 1970 time period, as you’ll see, but it was still sealed! Clearly, that was too much to resist, so I decided to take the plunge and pick it up.  Since it was still sealed, and I’d never heard of it, I decided to just let it sit wrapped up for this quick peek at the kit. It’s something that seems quite uncommon; I did a few Google searches and turned up next to nothing about the kit, and only one old ebay auction had a picture of the same kit.

So, let’s take a peek then, at least at the box for now.

Everything about this box screams that it is from about 1970; the colours, the fonts used, you name it. Then, as if to confirm it, I noticed that it said right on it that the kit is a “Pre-release custom version”. Thus, I figure that means that this kit was put out before the real 1970 Vette hit the showrooms. Now, if Palmer was anything like MPC, then there’s a good chance they got it wrong, at least detail-wise. There are several instances of MPC jumping the gun and producing a model of a car that ended up not existing (<cough> ’78 Pacer X <cough>), so I can’t help but wonder if the folks at Palmer just took an earlier, 1968-type kit and added custom parts, hoping it would be okay.  They did cover their collective hindquarters by saying it was a “Pre-release”, after all! 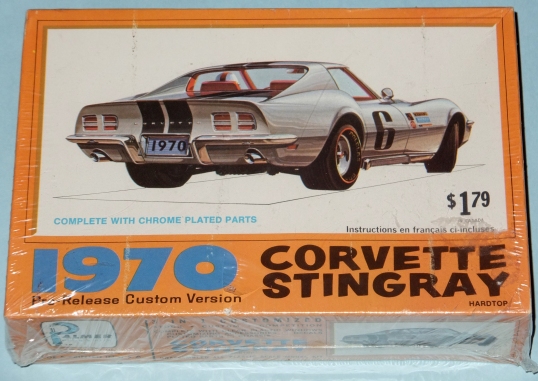 Here is the Palmer ’70 Vette hardtop, in all its still-sealed glory! There’s something oddly striking about the square tail lights and the almost clinically sterile approach to the artwork.

One of the most striking things about the box art is that the car is shown from the rear three-quarters. This is not normal for a car kit, for whatever reason, and I actually can’t think of any other car kit off the top of my head that has decided to use the back end of the vehicle to grab attention! However, Palmer’s rather backwards approach certainly makes the kit stick out, and in a market likely flooded with kits of Chevy’s shark-nosed sports car, maybe this made sense? Right away, you know you’re in some funky territory, too, because This particular Vette has double racing stripes, what look to be deep-dish wheels and RECTANGULAR TAIL LIGHTS! WTF?

Yeah, while MPC might wear the Krown for Krazy Kustoms, these guys seem to have decided to up the ante. Adding extra tail lights was a big thing, I know, but I haven’t seen the trick of changing the shape completely, except for the Monza-tail lighted “Farah’s Foxy Vette”, that is. Unfortunately, there’s no easy way to see what else is customized on this car, since the art’s perspective doesn’t allow it. This aside, though, I will say that the art looks very much like a design sheet; it’s got a highly technical look to it. There’s something professionally sterile about the angle and white background with only the square upon which the car sits to give any frame of reference. It could well be an artist’s conception or a proof from an ad firm’s graphic artist. Even though there’s a driver’s helmet visible in the car, it looks like it’s standing still. No, that’s not even right; it looks suspended in time. Is it parked, with those wheels turned hard at the front, or has the artist captured it mid-tailslide? I doubt we’ll ever know.

I do like the fact that it mentions that the kit is “Complete with chrome-plated parts”. I take it, then, at this time, that was something of a novelty? Or, if it wasn’t, maybe it was a novelty for Palmer? The other thing that’s cool is that the price is right on it. This kit was $1.79 in Canada. I don’t know how that compares to other, contemporary kits, but it doesn’t seem that cheap. At the same time, I have no idea why Palmer would even print the price right on the box like that! Talk about causing problems later! Imagine picking this up years later, paying more than $1.79 for it and then finding the original price underneath that! Burned!

Hmmm… no help here, on the short-side of the box. Gotta love that the price is hard-printed all over this thing, though. Why? Who DOES that?

I was hoping to get a better feel for the rest of the kit by looking at the sides of the box. Normally, there are other pictures of the kit on the sides, but alas, this is not Palmer’s way. The two end caps and the one side all have the same art as the lid. This could be so that no matter which side was showing, Palmer would still have the striking effect of a box-full of “Vette Butt” to help distinguish their product. On the one “long side” though there is, at least, some information.  We now know it’s a 3-in-1 kit, which we didn’t know before. Like all of its ilk, this model can be built in Stock, Custom or Competition trim. Sadly, there’s no real way to know what that actually means.

We also learn a bit more about what’s in the kit from the checklist of features on the side. It does have clear plastic windows, which I assume means non-tinted, since I’m sure most car kits have come with clear windows for a long time. It also has decals and customizing accessories, not to mention the aforementioned plated parts. It also, apparently, has a chassis. Um… yeah. Well, I mean, that’s good news and all, but is that a feature  you really need to mention? If it was “Highly-detailed Chassis” or “Multi-part Authentic Chassis” I could see mentioning it; model companies often do. However, it’s just “Chassis” for this Palmer, and that makes me worry. They mention nothing about the type and number of tires. Are there any? I’d expect so, but I’d expect a chassis too. Does the hood even open? Who knows? I guess it doesn’t matter, though, since we do get a chassis, and we can just build on things from there, right?

Knowing is half the battle. Now you know that this kit includes a chassis. That’s right, now you’re halfway there! As for useful information, you can leave those expectations at the door, good sirs and madams!

In a strangely consistent manner, this box has been able to tell me next to nothing about the kit. There’s no mention of operating features or if there’s an engine. Heck, there’s not even a scale on the box!! I believe it’s 1/32, but that’s just based on what I’ve found about other Palmers and the size of the box.

The other long side of the box, though… that’s where this kit makes its money! This is the rundown of customizing accessories. Or is it? On this other side, there is a whole list of accessories that are included for the customization of your kit. A quick check reveals all the standards, like sidepipes and extra gauges, exhaust extensions and a roll bar. There are also some fairly questionable accessories, like fins, aerials and spotlights… What the? Who puts spotlights on a Vette?

Here are the accessories you can use to customize your Vette! Maybe. Well, they’re typical at least. Solid decal sheet too. I’m starting to think this bodes ill…

The weirdest one, though, is “Wheel Discs”. Since when are wheel disks a good custom alternative for the actual Rally wheels on a standard Vette? Also, I know this kit is old, but who considers the window-mounted rear-view mirror a real custom option? Then there’s the decal sheet, which really doesn’t appear to be too Vette-specific at all, and doesn’t include the stripes show on the box. That’s when I took notice of the most interesting words on the box. In the middle of this list of odd accessories is “Typical Customizing Parts and Accessories”. Sure. Agreed. However, does that mean this kid doesn’t come with all of them? Is there a generic “customizing” rack that every Palmer kit got that had these things, and that you’d add them as (in)appropriate to your specific target vehicle?

There’s just something unsettling about this whole thing. It’s all so generic and non-informative. What am I missing? I shudder to think!

Normally, regardless of age or rarity, I simply tear into a kit. However, because this is a Corvette, and I have a few Vettes, the subject matter alone wasn’t enough to drive me to “pop the top”, unlike in the case of the Mazda Familia. Also, given the age of the kit, and the fact that it has remained sealed until now, gave me pause. I mean, there’s air in there from when Elvis was still alive and the F-15 hadn’t even been built yet! However, I have no idea if this kit is worth anything all buttoned up or not.

Thus, I am turning to you, my friends, to help me with my decision. I’d like to know if you think I should keep the kit sealed, sell it, or pop it open and view the (likely) horrors inside!

Please cast a vote in the poll below, and if you want to leave comments about anything related to this odd time-traveller of a kit, please do so! Just note: No matter what happens, I am NOT turning this into the Chia-Vette! Maybe. Then again, Maybe so? You can never be sure…