Mess with the best, die like the rest… SoC Dancougar in his ultimate form!

Taken on their own, the CBF mecha that make up Dancougar are pretty cool. The SoC versions of all of them are excellent representations, by and large, of the ones we see on the screen in the anime. However, the big question with any gestalt (combiner-type robot) is whether or not the combined form looks good.  Let’s face it, most of us probably want a full SoC Dancougar, not a bunch of SoC CBF mecha.

Thus, after fiddling around with the components, I decided to get to the heart of the matter, and form the mighty Dancougar.

The material world was denied…

The instructions were opened… and away I went.

The results were EPIC. After only a little bit of extra work, there before me stood the best representation of one of anime’s coolest robots. I can say without a doubt that the SoC Dancougar is one awesome robot.

The “standard” version of Dancougar is the combined form of the four CBF mecha, and the combined form of their rifles. The Dancougar itself is not much taller than the Big Moth (No surprise there!), but with the new feet and head he really does look different. The head, made from the Eagle, is much more elegant and streamlined, and having the feet be so much bigger than those of the Big Moth really helps too.

Here is the “standard” Dancougar, using the Big Moth’s weapons instead of the dangerously heavy Daigun.

Nice hat! The Big Moth’s turret not only destroys Muge’s soldiers, it helps keep the Eagle dry on those rainy days!

Dancougar’s main weapon is his Daigun, made of the four rifles of the CBF’s mecha combined into one. To do this, the main rifle (from the Big Moth as well) actually changes a bit, and the Liger’s and Cougar’s weapons bolt to the sides at the front. The Eagle’s rifle, almost as an afterthought, bolts on below the main barrel. It’s a nice touch, but really unnecessary. Unfortunately, the Daigun is difficult to hold, even for Dancougar, and is quite heavy and cumbersome. It looks cool, but that’s about it.

In addition to this weapon, the Dancougar can use all the Big Moth’s weapons. The main turret can elevate over Dancougar’s head, and the awesome box-like missile launchers from the Big Moth’s back can swivel around at the hip and give extra firepower. The AA cannons on the chest can also deploy. Given all that, you’d think that victory would be assured, wouldn’t you?

From the back, Dancougar’s monochromatic scheme actually makes him look more integrated than he does from the front! The holes below the tusks are for the Flight Booster.

However, evolution is a constant theme in the anime, as well as in the mecha themselves. Thus, to take Dancougar to the next level, Dr. Suzuki created a flight booster for it. This booster is a giant backpack with wings that bolts to the Dancougar, allowing it to fly. In addition, the pack has two MASSIVE cannons. Unfortunately, these can’t pivot over the Dancougar’s shoulders, which would look awesome. However, they do stand upright, giving impressive stature to this already monsterous SoC!

Here you can see how the Flight Booster attaches to Dancougar. Unfortunately, the Big Moth’s weapons must be retracted, first.

The only odd thing about the flight booster is that it is light metallic blue. This colour isn’t found anywhere else on Dancougar, but it serves to clearly deliniate the mech’s evolutionary path.

Fly me to the moon… well, okay, to the Muge Zorbados dimension! This is the Flight Booster separated from Dancougar. Looks better on than off.

So, a mega-huge booster pack isn’t enough? In the anime’s OVA finale, “Requiem for Heroes”, we see the CBF take Dancougar right to the doorstep of Muge Zorbados (the evil emperor behind Earth’s invasion) in another dimension, and fight his generals to the death. Eventually, the CBF must face Muge himself, and, of course, none of their weapons will do the trick.

Thus, the ultimate weapon is brought out, the “soul sword”, called “Dankuken”. Of course, the good folks at Bandai are sure to include this with the SoC Dancougar! The Dankuken is the most highly chromed toy component I have ever seen. It rivals the bumpers of freshly restored ’59 Cadillacs! With its painted gold hilt, the Dankuken is a very large (and shiny!) piece of equipment. It fits nicely into Dancougar’s hand, unlike the Daigun.

As far as I remember, Dancougar doesn’t have the Flight Booster when the Dankuken is deployed. However, I could not resist putting it all together! That’s how I display my SoC Dancougar; with both the flight booster and Dankuken in hand, the ultimate God Warrior!

DAN-KU-KEN!! Ultimate Dancougar doesn’t sit down for anyone, not even an alien god! With his big wings, guns and shiny sword, there’s no evil he can’t and won’t  smash! 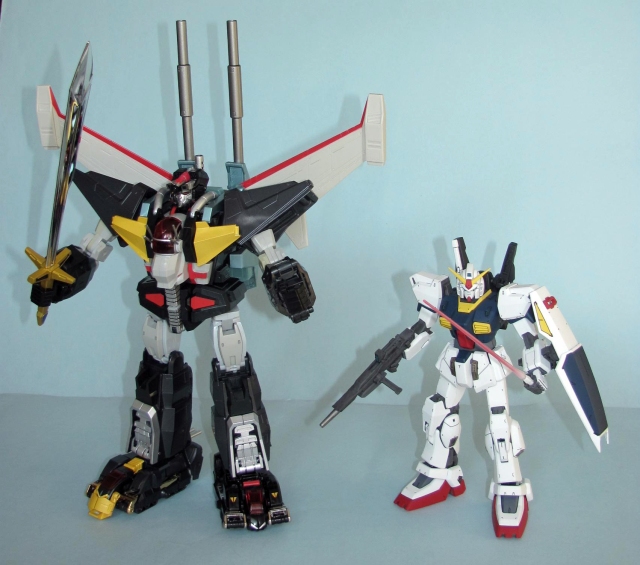 Here’s Ultimate Dancougar with both of his weapons, the Dankuken and the Daigun. While impressively large, the Daigun fails because it is too heavy to hold. The Dankuken succeeds because a.) it is a sword, b.) it is SUPER chrome-y and c.) it is a SOUL SWORD. Booya.