One thing that Dinky Toys were well known for was their gift sets. Like early Transformers Gestalts, you could either buy individual parts separately or you could get specific sets that had a whole collection of appropriately themed vehicles together. This was particularly common in the Military Dinky Toy line. The Mighty Antar Tank Transporter/Centurion could be had as a set, and of course there’s the 25 Pounder set, not to mention a number of others.

Gift Sets were always expensive and impressive pieces of kit, with custom-made boxes. When you got a Dinky Gift Set, you got a very special item. It wasn’t just the individual components in their original packaging Saran wrapped together like some more modern, “gift packs”! The Dinky Gift Packs were  something special, and the packaging conveyed that. That’s one of the reasons that gift set boxes are very valuable today; you can’t tell if a particular set of toys was part of a gift set or bought individually unless you have the box to prove it.

Now, that having been said, not all Dinkys were available as gift set components. However, that’s not stop to the imagination and creativity of my brother, who decided to use my 40th birthday as an excuse to really flex his skills and create a completely custom Gift Set just for me. While what you’re about to see is NOT a legitimate Gift Set, and I make no claim that it is, I wanted to display it here because it was just so freakin’ awesome.

This is what happens when you put an eye for detail, a love for the subject and some high-end modelling skills togehter. (Oh, throw in a bit of attitude, too…) The result, is the Geezer Set, non-Dinky Number 40Y!

As any Dinky collector will tell you, the sight of a blue-bottomed and white/blue striped lid signifies immediate Dinky Goodness. Thus, when my brother set out to create the 40Y (appropriatley named for the 40  years I’d passed on this earth at that point), he made sure to simulate this as well. He got a box from a local craft store and painted the bottom blue, and then painted the top white. This is only the first step, though.

He then found a bunch of the catalog images for the Dinkys that he was going to put in this set, and scanned them into Word. Using various different fonts and after a lot of time, he was able to simulate both the Dinky Toys Supertoys font, as well as the scripted “Gift Set” font. He combined these with the images to create a lid that was a conceptual and in-spirit copy of a typical Supertoys gift set. Of course, since I was turning 40, he couldn’t just leave it alone, and the threw in a few jabs to my my apparenty “over-the-hill-ness”.

This is the box to the Dinky 40Y set. If that isn’t an example of Craftsmanship, I don’t know what is. Carefully read the text on the box to see the few age-related jabs thrown my way!

Seen from this angle, the blue bottom of the box really shows up. Each of the lines was individually masked, too! Talk about dedication!

Inside the box, the amazing job of replication continued. He sprayed the inside of the box with a dull yellowish grey (likely a Tamiya grey of some kind – it looks like their paints) to replicate the raw cardboard of Dinky boxes. Most importantly, he recreated the yellowish inserts that hold the Dinkys in place. Now, many Dinky gift sets had inserts to hold their contents on their sides. However, my brother wisely decided to abandon this feature. It’s best to place the Dinkys on their wheels/tracks to avoid unnecessary wear, even if the insert is made from foamcore display board.

Each piece was given an appropriately-sized hole in which to nestle, and each was identified with both its early and, where appropriate, later, Dinky Number. Notice that there are a lot in this set that use the old number, and there are a few that were never identified. I will, of course, review each of these later (in the coming years), but for now, let’s just look at what was in the box. 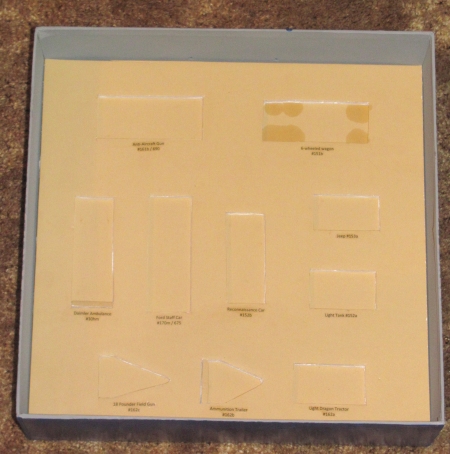 Here’s the inside of the “40Y”: Notice that nice grey inner box and the typical yellow insert.

Below are images, zoomed in, of what was in the gift set. Sadly, I don’t have a whole picture of the set intact in the box; I was in too much of a state of excitement to remember to do that. Still, if you stitch all the pictures together, you can get a feel for it.

This is the Anti-Aircraft gun number 161b/690, complete with gear-driven elevation on the barrel, and with both side flaps intact! Note it can be “trained”, since it has both male and female trailer hitches!

This is the old 6-wheeled wagon, number 151b. This doesn’t have a second number, since it was apparently not reissued later.

Here is the old Jeep (153a) and the Light Tanks (152a). Neither of these was reissued under the newer numbering system. There was another, later Jeep, but it’s a different casting altogether.

On the Left is the Ford Staff Car (170m/675). This vehicle was only offered in the US, and is quite rare in England and the “colonies”. The 6-wheeled Reconnaissance Car (152b) was never reissued, and is a very interesting mix of weighty and dainty!

This is the Daimler Ambulance (30hm). Interestingly, this WAS reissued as Dinky 253/264 later on in a ciivilian guise, with cream or white coloured paint, too.

This is another pair of oldies! The Light Dragon Tractor (162a) has real metal track links like the Light Tank, and this example even has a few extra crewmen! The Ammo Trailer (162b) is smaller than that in the 25 Pounder set.

Here is the 18 Pounder Field Gun (162c), shown with the trailer for scale. It is a very dainty piece, and the gun is fixed (doesn’t elevate). The blast shield is also very thin, almost tinplatedly so.

There’s not a lot more I can say about the “40Y” set. It is the product of my brother’s very excellent and imaginative mind, and I consider myself to be supremely lucky to be the recipient of it. There are a lot of nice and interesting pieces in this set, and I intend to make sure they get their due here on the Lagoon, although it will likely take me a while.

Like all Dinkys, these are amazing replicas from a time long-past. I am surprised at how slight and (to overuse the word) dainty the feel of these pre-mid-1950’s Dinky Toys is. I’m used to big green bricks of steel, and while they’re heavy, some of these older Dinkys are more delicate feeling than their younger brothers.

But then again, isn’t that always the way?

Getting this much Dinky awesomeness all at once is pretty overwhelming, especially when you consider that I’d not seen many of these models before. My Uncle’s catalogs only go back to 1956, and many of these models predate that. Thus, I had never even seen pictures of most of them! This made the present a double surprise, and there’s not much more you can hope for than that. Of course, at my age, I apparenlty have to watch out for too much excitement, or at least that’s what the box is implying!