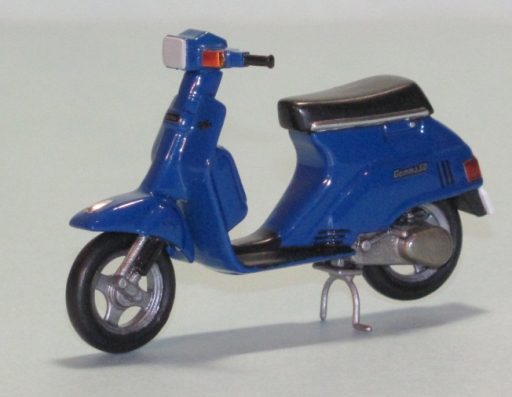 You know you WAAAANT it. This is the free bonus with the Skyline 2000RS four-door: the Gemma 50 scooter!

“Free toy inside! Free toy inside!” So exclaims Stanley Spudowski  on the set of his children’s show as he digs frantically through a box of cereal, desperate to find the (doubtlessly cheap and useless) prize secreted at the bottom of the box. With most of the box of whatever-it-is cascading down around him, Stanely looks at the camera (and his audience of children) and admonishes them “Don’t tell your parents you do this!”.

This is one of the scenes in the old cult-favourite Weird Al Yankovic movie UHF. (If you haven’t seen it, go do  so. You will laugh.)  What does that have to do with a Tamiya scooter model? Plenty. Stanely’s words of wisdom regarding cereal-box toys should strike home with most, if not all of us. Have we not, at some point, been enticed to buy something more for the “free bonus” than for the article itself? I know I have.

A perfect case is the Tamiya 1/24 Skyline 2000RS. I didn’t know or care much about the 1981 iteration of this car, and was only half-way interested because it was the only 4-door Skyline I’d ever seen from that era. However, on the box it proudly proclaimed that in addition to the kit of this somewhat pedestrian automobile you ALSO  got a bonus 1/24 Suzuki Gemma 50 scooter kit! That was enough for me. You’re telling me I get a weird-ish car AND  a scooter? F-yeah!

Pretty cute for a bonus kit, don’t you think? The Gemma 50 actually requires more skill than the Skyline!

The Gemma is not an advanced kit. it has two halves, two wheels, a kickstand, a licence plate and handlbars. It also has a full set of decals (!) for the badges and dashboard. Thus, while minimalistic, it is a full kit, worthy of all the attention one would pay to a larger, more impressive vehicle.

The kit fits together fairly well, given its age, but you have to be creatve; it’s a lot easier to work on this thing if you can find a way to put the rear-wheel in AFTER you paint everything. I cut off the axle tab and glued some sheet styrene up inside the fender to act as a positioning block. Thus, when I was done, all I had to do was slide the wheel into place against the block and glue it in. This saved a lot of masking and trouble down the road.

Here you can see some of the engine detail. While moulded-in, it can be made to look like separate pieces by using metallic paints and washes.

According to the instructions, the Gemma came in a few colours. I chose blue, but couldn’t find a very good photo anywhere. However, the box showed it in a fairly “blue” blue, so I chose Model Master Acryic’s GM Engine Block blue. This is the same colour I use on all my Gundams, so I had lots.

I hand painted the kit blue, then sanded and Futured the snot out of it. I painted the seat flat black and then gave it a very light coating of Future to give it a more vinyl look. I did the wheels in Aluminum, and the engine in Steel, Aluminum and Jet Exhaust MM Acrylics.

More Future followed the decals, and at the end, everything got a coat of wax.

The Gemma seems to be a higher-end scooter, and  has chrome trim. For the trim on the body sides and the little “hood ornament” on the fender, I used Bare Metal Foil. 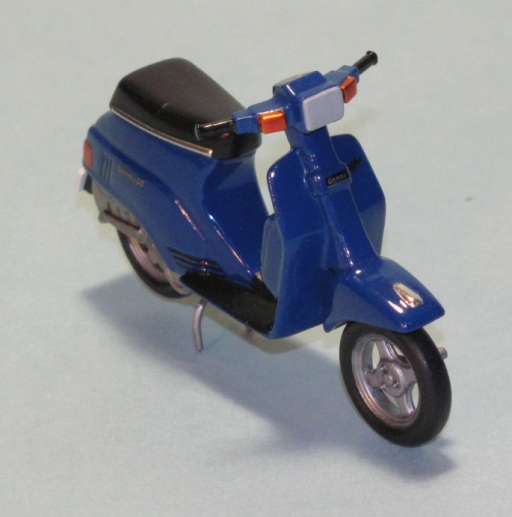 The chrome trim on the seat and the ornament on the front fender are chromed. Pretty zooty for a little scooter!

The Gemma is awesome, because a.) it is weird, b.) it is a scooter c.) who else builds this? and d.) It is a FREE scooter. Did I mention it was free AND weird. I might have…

It’s not as easy a kit to make as you’d think, and solid amounts of skill are needed to get the sanding and painting to work right on it. The rear wheel workaround is essential to making life easier in the long run, but only modellers of at least moderate experience are likely to consider it.

On the other hand, it is a fun little kit to build, but I wouldn’t recommend it for everyone.

You can just make out the dashboard decal, as well as the labelling on the front spine. The turn signals are done with Clear Orange over BMF.