Rockin’ it ’80s turbo-style with the AMT (nee MPC) 1988 Daytona. This is a pretty nice kit of a long-forgotten road warrior!

In the wake of the second oil crisis in the early 1980’s, most people, even those “in the know” figured that performance motoring was dead. To take the place of the muscle and pony cars that had scarcely more than a decade earlier ruled the roads, consumers were presented with a number of barely warmed-over derivatives of terribly lame and uninspiring cars.

Ford EXP. Citation X-11. The Omni-based Dodge Charger.  This is what “high performance” meant in what one automotive magazine called “The Era of Lowered Expectations”. However, not all was lost. By the end of the decade great strides had been made in returning power to the motoring people. Mustang had its GT and 5.0 models. The fearsome Pontiac GTA and IROC Z Camaros were running loose. It seemed that maybe, just maybe, it wasn’t so bleak after all.

Somewhere in this slowly lifting, self-imposed “performance embargo” came a new Dodge performance car. It wasn’t like the tire-shredding Hemi ‘Cudas and Chargers of days gone by, but this new car offered a lot more than the terribly lame Omni-based Charger it replaced. It was actually the final evolution of that line. What better name for it then, than the storied name of the ultimate Charger of old; Daytona.

The 1988 Dodge Daytona was, in its highest trim level, a respectable performance car. It mounted the 2.2L Chrysler Turbo II engine in an aerodynamic body. It had a lot of the tricks of the day, including pop-up headlights and a hatchback roof. Not surprisingly, MPC was all over the new Daytona. I mean, they’d made a kit of every one of the other Omni-based abominations, so it only made sense that they’d make a kit of the Daytona, the swansong of the body style. Ironically, it was also a swansong for MPC; shortly after they made their 1988 car kits, they were done themselves.

End of the road! For both the Omni/Charger evolutionary path, and the mighty MPC, the 1988 Daytona was something of a high water mark. It was also a last hurrah.

This kit is the newer AMT “Muscle” version of the MPC Daytona. It is cast entirely in light grey, with some chrome parts for the engine and wheels, and clear red taillights. The first impression of the kit is a solid “meh”. There’s no pizazz to the box art, and the kit on it is not only uninspiringly, but also incorrectly built. The instructions are adequate, largely, but don’t help much when it comes to using the proper engine parts.

The engine is the kit’s biggest strength and largest weakness. There are actually several (3) engines in this box, but the instructions don’t tell you that. I found building the engine to be very confusing, and it was only through some internet searching and looking at the original sales literature that I was able to figure out exactly what engine the car had, as well as what trim level it was!

The mighty 2.2L Turbo II motor from the rear. I used black and brown washes to bring out the detail, but kept them thin so the engine wouldn’t look too dirty. 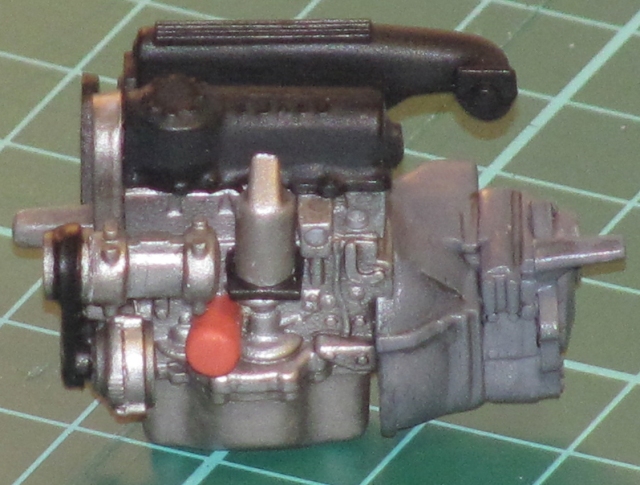 From the front, the Turbo II isn’t all that impressive either, but it was a pretty good engine in real life. Not a Hemi, for sure, but not the anemic VW-sourced slug-bucket from the 1979 Omnis, either.

The kit has, as do all MPCs, some flash, but it cleans up nicely, and most of the parts actually fit very well together! The chassis is well detailed, and engine bay is one of the more detailed ones I’ve seen, period. You can tell that this was right near the end of the line for MPC; they finally had it right!

One big hassle was the spoiler. It had two very prominent sink marks at each “trunk split”, and these had to be filled and sanded. I had to glue the spoiler onto the body BEFORE painting, since I knew it would never stick after painting. The problem was it was so thin and flexible that it didn’t want to sit properly. I had to tack it down with glue as I went around the car; a bit at a time!

Sink mark or dumb fake bullet hole? At this range, even I couldn’t be sure! There were two of these monsters on the spoiler, both of which HAD to be dealt with before gluing the spoiler on.

The only other problem was the bumpers. As I’ve found on most cars with integrated bumpers, the endcaps for front and back don’t fit on properly most of the time. Firstly, there’s almost never an adequate surface for gluing them on, meaning that they are prone to snapping off. Also, positive location is an issue. To fix this, I glue little pieces of sheet styrene to the insides of the fenders and use them for both gluing surface and location.

Like all MPCs, the best detailing on this kit is in the interior. No American manufacturer seems to put as much detail into their interiors as MPC. The bucket has great door detailing, nice carpeting detail (fake pile to make it really look like fabric) and extremely accurate dash. As always, building an MPC interior is a rewarding experience.

Daytonas didn’t come in a huge variety of colours, but one that sticks out is a metallic, electric blue. Interestingly, the sales literature also shows that there was a light blue leather interior available for the Daytonas. Yep… light blue leather. Well, that’s just too awesome to go with a “Daytona Blue” exterior, so I had to do it. I painted the interior with a mixed light blue made from Testors Model Master Acrylics. It was some Duck Egg Blue, Flat White and GM Engine Block Blue, plus Tamiya Flat Base to give it a reduced sheen and speed drying. To accentuate the carpet’s pile and cracks in the seats, I used chalk pastel. I ground up a darker blue colour and applied it to the seat cracks with a fine paintbrush. I then used a worn, stumpy brush and “ground” the pigment into the carpet. This added “shadow”, giving the seats depth and the carpet a more ‘carpety’ look.

Totally legit, according to the sales catalogue, the light blue leather interior is a very rare option. Don’t be mesmerized by the GIANT CAR PHONE on the centre console! Its colour was likely chosen so that even as it yellowed with being smoked on, it would look the same.

In this shot of the passenger’s side door, you can see some of the pastel shadowing on the seats, carpet and especially the puffy door treatment. Is this a luxury car or a sports car? Maybe, just maybe, it’s both! 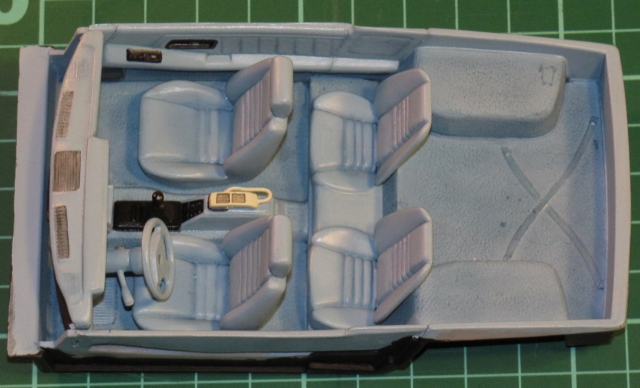 This overhead view clearly shows the shadowing in the seats and carpet Note too the tie-down straps in the trunk. That’s a typically MPC-esque detail to add. RIP MPC.

For the exterior, I used a mixture of Future, MMA GM Engine Block Blue and Jacquard pigments to get a very vibrant metallic blue. This was airbrushed over the car once it has been primered in grey, and then in GM Engine Block Blue. Using the blue base coat made it so that the metallic blue covered much better, and gave it depth as well; it wasn’t thick enough to cover the grey on its own.

When all the paint dried, the car was given multiple coats of Future and let sit for a few weeks. It was then sanded down to 12,000 grit using Detail Master’s sanding cloths, and the whole thing was given a coat of Turtle Wax Ice Paste Wax, to give it a nice shine. 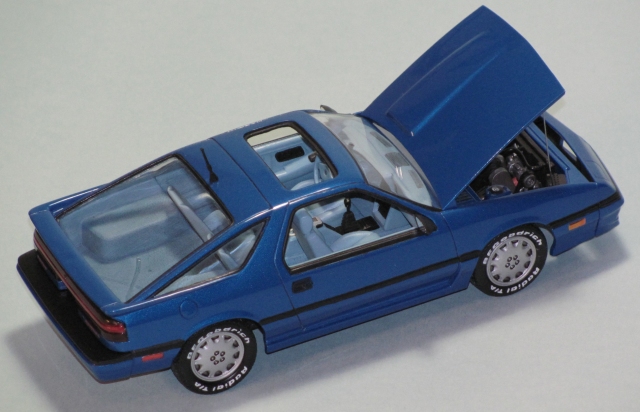 Blue on the inside deserves blue on the outside. You can see the “Daytona Blue” metallic paint I mixed by hand.

You can see just how much glass there is on the rear hatch from here. Heat buildup in the summer must have been terrible, and I can only imagine that the cheap Chrysler leather used in the interior wouldn’t stand up for long.

The windows went in very well, and were white glued in place. The biggest problem was getting the engine to fit in; it’s a tight fit, and there are a lot of hoses and ducts thanks to the turbocharger setup on this engine. However, when complete, the engine bay has a suitably ‘busy’ look, much more so than many other kits.

I stripped the chrome from the wheels and sprayed them with aluminum paint. The real wheels aren’t chromed, and it looked silly. I used Citadel Baddab Black wash to pick out the bolts and ‘holes’ at the wheels’ edges. This worked really well, and added a lot to the wheels. The final touch was to white-letter the tires. It’s rare these days to have a car with actual letters, and while I know that they weren’t really in vogue in the late ‘80s, I still thought it added some “beef” to the final product!

Because this is a kit from the 1980s, it also has a very cool optional piece: a car phone! In today’s world of Bluetooth and cellphones, having a home-style (albeit touch tone, not dial) phone bolted to the centre armrest seems absolutely ridiculous. However, in 1988, it was THE BOMB. I painted the phone in a sickly cream-white, which I remember as the colour of our home phone back in the day. 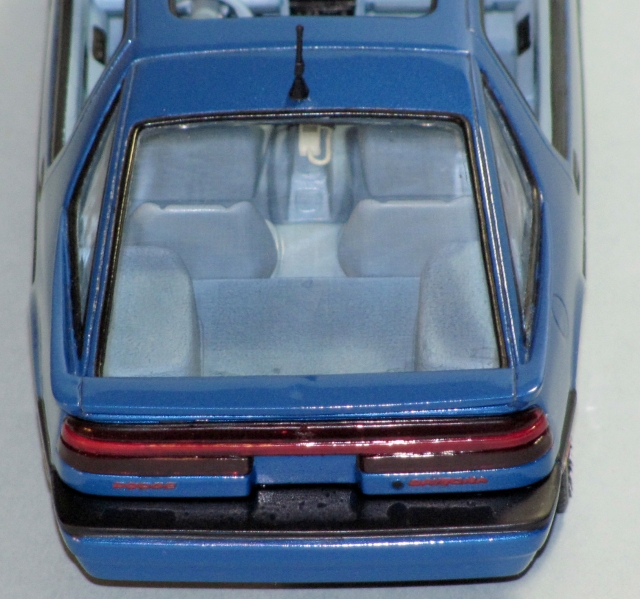 With every car phone, comes PRETENTIOUS AERIAL! This Daytona lets you know the driver is important (or at least self-important) with its little roof-mounted aerial. Note the full-width taillights, another “futuristic” idea (Iikely stolen from the Firebird).

The 1988 Daytona is not a car you see around much anymore. For that reason alone, this kit excited me; they were everywhere at one point, but we seem to have forgotten them. As a kit, this is actually a pretty good one, and if you’re a car buff, it won’t provide any untoward challenges.

There are weaknesses in it, to be sure, but overall it builds up nicely and is a good representation of the state of motoring in the late 1980s. It’s not a great kit for a beginner, since it has so many engine pieces, but other than that, it shouldn’t prove to be too difficult.  Thanks to the AMT reissue, there are now a lot of these things flying around, so finding one of the old MPCs is no longer required.

Sure, this car itself might not appeal to a lot of older modellers, but for those who grew up in the 1980’s (especially those who had a license or aspired to one) the Daytona was a pretty cool car. Also, if you think about it, this Daytona is a really good homage to the original. With an aero nose, big spoiler and pop-up headlights, the 1988 Daytona does actually carry the name forward with a certain logical evolution. This might be the kind of kit that’s perfect for a near-mid-life crisis/nostalgia build!

Street Power! While it’s a bit dorky on one hand, I am always amazed at just what a good looking car the ’88 Daytona is from many different angles. This one is showing off its Turbo II, but often such a raised hood meant the advent of any of a myriad of failures…