Unloved and forgotten, the G-Saviour is still a pretty hot mech overall. The blue beam shield rocks you!

However, does the same thing happen when I say “Mark Curran”? No? Why not? Oh, could it be because Mark’s Gundam is the G-Saviour (never actually referred to as a Gundam, technically) from the rather failed movie of the same name?

Let’s face it, G-Saviour was not the best way to celebrate Gundam’s 20th anniversary. However, while the movie isn’t the best one ever made, and the CG was a bit primitive, you have to give the folks at Sunrise credit for trying to make a live action Gundam. Or do you? With every new Gundam show or movie comes an avalanche of new kits and toys. However, it seemed that the writing was already on the wall for G-Saviour insofar as Bandai saw it: they only ever made a single kit from this clunker movie.

The back of the G-Saviour has more mass than the front, thanks to the finned engines and large hip binders.

That having been said, the kit itself is actually very nice. The G-Saviour is not an ugly mech by any stretch, and it makes a nice display piece beside its more well-known cousins. It is well-detailed and well-proportioned, and if you can get past the fact that there’s no armour on the upper arms or legs (saves weight for maneuverability) it is rather elegant. It goes together well, colour and part separation are excellent, and it comes with a clear blue beam sabre and blue beam shield; something more or less unheard of when it was made, and still very rare now.

I got this little orphan in about 2009 at Gundam Base in the Pacific Mall in Toronto, Ontario, Canada. It was at the bottom of a stack, and I can remember seeing it there years before when I had also been through there. I didn’t want him spending his days all alone and unloved, and I thought I could give him a good home. It built up very well, and I was a big fan of all the verniers and vents on it, especially on the hip binders. 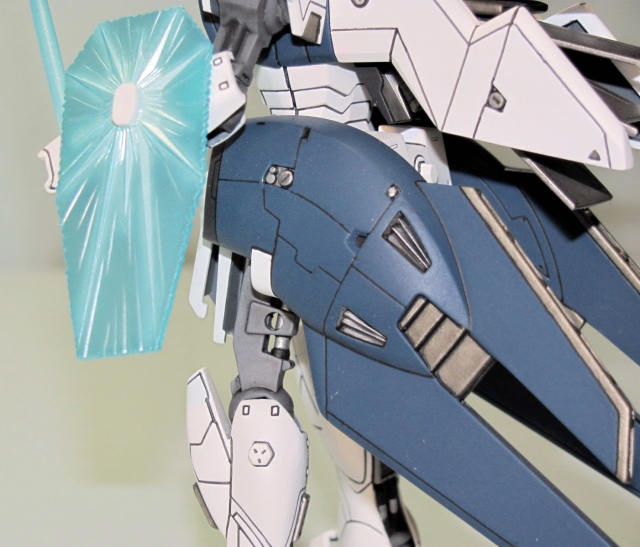 Mmmm… Detaily goodness! The hip binders have a lot of vents, verniers and cool details that really need to be painted in metal shades to appreciate. Note the bare leg frames and hydraulic pistons, too!

This is not a common kit, and it’s not one that many people feel compelled to build. However, I think it looks good; while it’s not as flashy as some newer MSs, it is definitely lets you know it’s a Gundam. Oh, and how many other Gundams have all-white feet? That’s a selling point in and of itself! 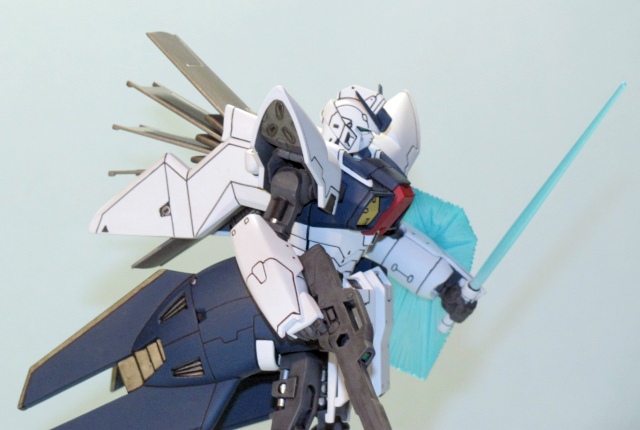 From the right side, the beam shield still shows up well! Cool shoulder-mounted verniers, too. Lots of good detail on this guy!

Front-on, the G-Saviour’s unique “vents” can be seen. They aren’t breathers like on most other Gundams. They seem to be just plates, but it’s a neat aesthetic. They remind me of intake guards on fighter planes.

The size and spread of the engine fins is actually very extensive, as can be seen here. They are like an F-91’s engines on steroids! Note the bare upper arms, just like the bare upper legs!

Unloved but unafraid, the G-Saviour has a prominent place on my shelves. With white feet and a dark blue V-antenna, it’s a welcome thematic break from “just another Gundam”!