This is the old Bandai Icelina figure in 1/20, all finished up. While she looks refined and lady-like, her emotions drive her literally to her death.

Way back in the day, it wasn’t just mech kits that Bandai turned out when Gundam became such a hit. In addition, they made models of vehicles and space ships, as well as a series of 1/20 figure models. Bandai seems to have foreseen more interest back in the early 1980s for figure kits than they do now; it’s rather difficult to imagine them just selling an individual figure as a stand alone model.

When Gundam’s 20th anniversary rolled around in 1999, Bandai reissued these kits altogether in one box, called… ready for it… the Gundam Characolle. Bloody heck; there’s a portmanteau for you! In real words, it means “Gundam Character Collection”.  This is a set of 10 figure kits from the original Gundam series, all in one box. There are 4 Zeon and 6 Federation figures.

One of the more interesting and tragic characters in the original Gundam is Icelina Eschonbach, the lover of the youngest Zabi sibling, Garma Zabi. Icelina is not in very many episodes, but she does make quite an impact, and her untimely death serves to show Amuro another face of the war he’s caught up in.

As with all of the kits in this series, Icelina is cast in clear plastic, with a black plastic base. I don’t get the Japanese predeliction for clear and chrome versions of things, so I have no idea what I’m supposed to get by having the kit be transparent, but whatever. It has to be glued and sanded anyway, so it could have just as easily be done in grey.

Regardless, the kit is very simple, and aside from a few seams and a bit of sanding goes together very well. The detail is actually very good, including the moulding on Icelina’s necklace.

From the side, you can see that there is a lot of detail that would be missed if you left Icelina clear.

Because she’s a figure, painting Icelina is a bit of a challenge. It’s necessary to put her arms on first, so everything is sanded perfectly in place, but this makes painting the bare parts of her arms a not-so-simple task. There were many instances of touching up on this one, I can tell you!

For her skin, I used a mixture of Valejo and Testors Model Master flesh. This is not necessarily a good idea, and I’ll avoid using the Valejo next time. I don’t like the Valejo paints at all, although I realize I’m solidly in the minority on that one. I find them sticky, with long trying time and they’re very bad for tearing themselves up. That made life a lot more difficult. They also need to be thinned, but cover poorly in multiple coats. I’m sure I used them wrong, but adding the MM acrylic saved me.

Elegant party wear can leave a lot of exposed skin. This may sound okay, until you try to paint them with Valejos! Not my paint of choice…

For her dress, I used two different, custom-mixed MM Acrylics. I used a custom-mixed MMA yellow for her hair, and MMA white for her shoes. The hardest part on any figure is the face, and it’s also the most important part, especially on an anime figure. The eyes are the key; if you mess them up, you’re toast. I put down a dot of white, and then did the blue. After that, the the white “pupil shine” was put in. I did the eyebrows and the eyelashes with a Gundammarker, and I have no idea how, looking back at it. I don’t know how I didn’t slop it all over the place, but I do remember doing a lot of fine scraping with a new #11 blade, to touch things up. For her lips, I used a tiny bit of a deep red I had lying around.

The stand was done with MMA aircraft Interior Black, and there was a small addition I had to make: I put a rod up through the base to hold Icelina up. She’s not stable without it; her feet are too small to hold up that big dress. The rod goes up her skirt (keep your mind out of the gutter, folks) and if you position her just right, both of her feet are flat on the stand and she doesn’t move at all. 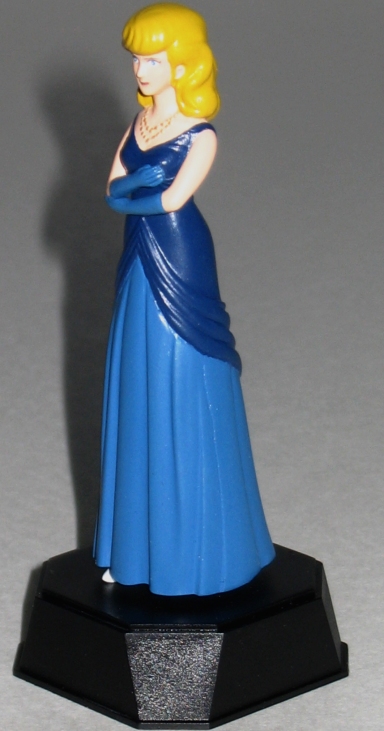 “Is that a rod up your dress or are you just glad to see me?” The small metal pole I added to the stand is the only thing keeping Icelina upright. That must have been some party!

Icelina is an interesting character, and this is a neat, if simple, kit of her. It’s definitely not a subject you see done very often, and she’s a nice addition to my collection. However, she’s very small and fussy, so someone who doesn’t have a lot of patience or experience will likely give up on her sooner rather than later.

When I built her, it was before I’d discovered the magic of pastels, so there’s no shading on her. If I had to redo her, I would definitely add some shadows to her dress and hair, but that not withstanding, I still think she turned out well. 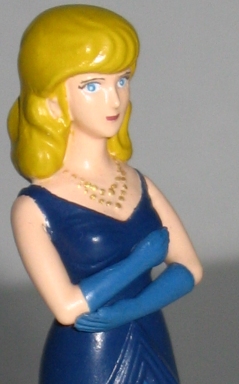 For anime figures, it’s all about the face and eyes. Icelina’s weren’t that detailed, but some fine paint work really makes things come alive.