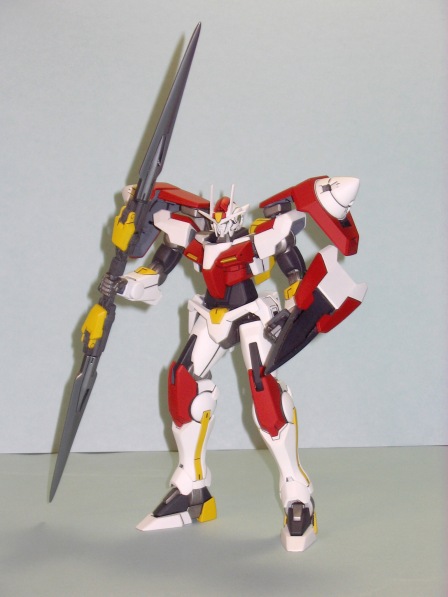 This is the 00 Gundam all dressed up for Hallowe’en as Tekkaman Blade. Or, is it a failed audition by Blade to be in the next Gundam? Who can tell? I’m beginning to think even the folks at Bandai might not know for sure!

Ever notice how some things look the same as others, even though they’re technically not related? This happens all the time and in all fields. In the world of mech design, it’s more prevalent than you might think. In many cases, one mech is designed to “evoke a feeling of similarity” to another. The design of most Gundams is like this.

However, I always find it interesting when I see two mecha from DIFFERENT series that share uncanny design similarities for no apparent reason. Now, of course, most mecha are humanoid in appearance, and there are only so many ways you can make a cool looking robot, perhaps. But it seems that in certain cases, the similarity goes much further than just general aesthetics.

One such unlikely pair, I found out by accident, is the 00 Gundam (confusingly, from the “Gundam 00” anime) and Tekkaman Blade, the 1990’s re-invention of Tekkaman the Space Knight, an early Tatsunoko series about a guy in a powered suit fighting off aliens.  At first, you wouldn’t think that they would be anything the same at all, right? You’d definitely be forgiven for thinking that, since I was in the same boat when I bought the 00.  However, I soon discovered differently… 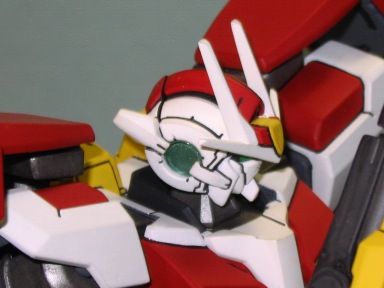 “No, no… I’m not Tekkaman Blade… I get that all the time, though.” Even the shape of the head and its decorations are amazingly similar to Blades’!

The 00 Gundam is typical 1/100 Gundam 00 kit. It isn’t Master Grade quality, but it’s well formed and fits together really nicely. Unlike the Astrea F that I built, there isn’t any of the “GN Cord” rubberized bits on the 00, so that both simplifies construction and cleans up the design. There are a few “GN Windows” on the arms and legs, which promised to add some neat visual appeal, but by and large, the 00 is just another clean, athletic looking Gundam.

The big deal with the 00 kit is that the twin GN Drives on the shoulder armours actually light up! There’s a small LED unit in each shoulder, and these send light to a ring in the middle of the drive. The LED is extremely bright, and when lit up, the drives look really cool. The only problem is that the battery each of the GN Drives uses is very expensive, and was hard to find in my neck of the woods. The batteries are CR 1220’s, which some digital cameras use for the time/date functionality. Normally, I don’t like to light my kits, but for this one I made an exception. 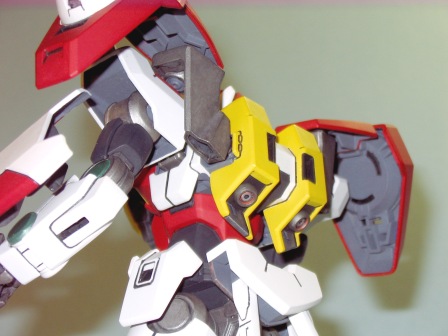 This “worm’s eye view” of the finished kit shows the housing for the LED in the shoulder armour. The switch is just visible at the bottom of the circular part.

The kit doesn’t come with a lot of weapons; just a shield and two GN Swords that double as rifles. These are kind of weird, they’re not really that convincing in either form, being odd looking swords and dumb looking guns. Still, they’re all the 00 has to work with, so you’ve got to do something with what you’re given!

The kit builds nicely and there aren’t any surprises, so if you want a fairly simple kit of a major mech in 00, I’d suggest the 1/100 series vs. Master Grades, which are getting ridiculously fiddly in some cases.

Don’t I Know You?

One thing I always do with a model is spend a long time looking at it after I buy it. I almost never start a new kit the same day I get it. I find it very fun and interesting to really look at all the pieces and instructions to get a feel for the kit and how it goes together. During this phase, I’ll often come up with ideas about what I want to do to build it a certain way, or changes I’ll want to make. In this case, I came up with the startling realization that the 00 looked a lot like the Tekkaman Blade kit I got back in the late 1990s.

I got Blade off my shelf and started to really scrutinize the two designs. What I found was remarkable: There are a lot of, not only shape and proportioning similarities, but the sectioning of the mech where I could split up colours really seemed to match as well! Delving further into my idea, I found that the GN “Swifles” (my new compound word meaning a combo of sword and rifle) could be coupled into a double-ended sword on the 00. Well Tekkaman Blade’s short swords could do the same! Tekkaman Blade had a shield on one arm, just like the 00. Both have very aerodynamic heads and are lithe in appearance.

The more I looked the more fascinated I became, and then I realized that the GN drives on the 00’s shoulders were analogous to the deployed Voltekkers on Blade’s shoulders! Also, both light up green!  I started to get a feeling that fate was playing a bit of a game with me, and was issuing me a challenge: Could I make a convincing Tekkaman Blade homage out of the 00? 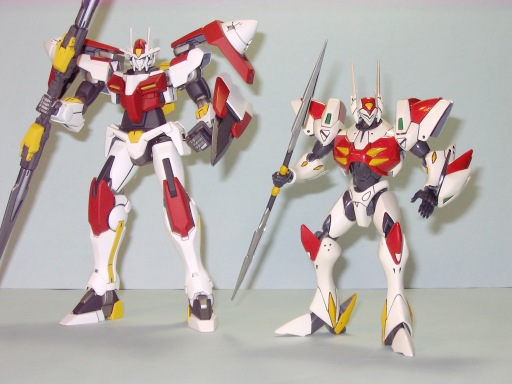 Proof that I’m not crazy after all! Here is the 00 Blade Custom beside the old Tekkaman Blade kit. Painted up like that, the 00 really does look like Blade, doesn’t it?

Actually building the 00 as a Tekkaman Blade homage wasn’t very difficult at all. To start with, I had to think of a name. It seemed appropriate to call it the Gundam 00 Blade Custom, and that’s how I’ll refer to it from this point on. Well, I’ll likely shorten it to 00 Blade; that works!

Just like the Astrea F, the 00 Blade was an easy mech to build. There was less to worry about on the 00 Blade, though, because there was no GN Cord. All the pieces fit fine, and there weren’t any surprises. There were a few things that did need to be changed, though. The first was the stupid aerials on the upper chest potion. Typical of 00 Gundams, the 00 has two aerials on its chest/shoulder area. These look dumb and generally get in the way of things, I find. I cut them off, since there’s no analog for them on Tekkaman Blade.

I also modified the swifles so that they would look more like Tekkaman’s blade weapon. This meant filing down the tips so that they were pointed, rather than chiseled and stepped. I also shortened one handle so that when the double blade was held in the 00 Blade’s hand, it was more or less symmetric above and below the hand. There weren’t any other modifications needed, really. There were a few workarounds on the chest vents and shield, but other than that, the kit was largely put together like the instructions said!

Left: The original Swifle tip; a weird chiselled end that looks neither like a sword nor a gun.
Right: The shaped Swifle, now unquestionably a sword!

Here’s the swords put together with their joiner in the middle. As you can see, this was way too long to be practical.

Close up, you can see the shortened handle on the upper Swifle. This helps to balance the weapon out a lot, and makes it far less gangly.

The paint job is the biggest difference between the 00 Blade and his normal Gundam cousin. I used a purple and blue augmented Tamiya Flat White for the white, and Testors Model Master Acrylic Guards Red for the red. The yellow is a modified MMA based on Blue Angels Yellow. The “black” is non-metallic Virsago Black, made up of MMA black and Gunship Grey.

The key was to figure out how to break up the paint scheme to most accurately reflect Tekkaman Blade. This is why, for example, the back of the feet are yellow and the fronts are white, why the shoulders have the red/white pattern they do and why the shield has the red/white/black separation that it does. In fact, to get the black onto the shield, I had to paint the middle of the blade! This actually looks quite cool, though, so I’m glad I was forced to do that.

Here you can see the shield, with the middle part of the blade painted, to simulate the black on Tekkaman’s shield. The 00 Blade’s shield is much larger than Tekkaman’s, though.

The colours were all hand painted, and the entire mech was coated with Delta Ceramcoat Matte Indoor/Outdoor urethane varnish. The blades on both the shield and the Swifles were painted MMA Steel, then over coated with a thin layer of semi-transparent blue metallic paint, which I wanted on there to make them look like tempered metal.

To complete the picture, I put the two batteries into the GN drives on the shoulders, and fired them up. I must admit, it looked really cool! They lit up a lot, and in a dark room, the GN Drives really shone! They lit up everything around them, and I was very impressed. However, it’s a paint to activate the drives (the switch is under the armour, on the inside of the vertical plate, and thanks to the painting in there, it’s a tight switch to move) and I don’t do it often.  I went to fire them up the other day to take a picture of the 00 Blade lit up, and I found that neither of the drives would light. I think I ran it for a total of about 10 minutes over its life, so that’s not very impressive. I don’t know if something’s come loose or the batteries are dead, but either way, my 00 Blade will now stay forever darkened. 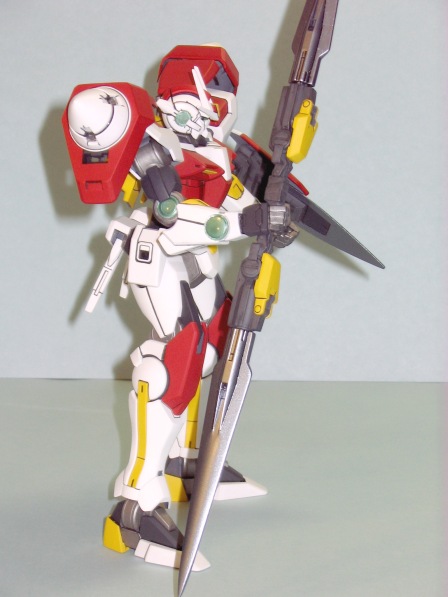 While the “GN Voltekkers” looked awesome when fired up, they just aren’t worth the effor, in the long run. Besides, they look cool just being cones on the 00 Blade’s shoulders. Unfortunately, the 00 Blade will never be lit up again.

The baseline 00 Gundam is a nice kit, with a well-thought out assembly procedure and a low level of complexity. It’s perfect for any skill level of modeller, since it’s one of those kits you can make as complicated as you want, but that at the core is simple enough for even beginners. The light-up function is neat, and looks like it could be a lot of fun, at least for a beginner, but it’s really more of a pain in the backside than it is worth. The low-lifetime of my example is likely due to some fault of mine; perhaps the switch wouldn’t turn off enough to prevent power drain, but it wasn’t on enough to allow the LED to light? Who knows? The fact is, though, that you should build a kit to look good unlit, and then consider it gravy if it looks nice, and stays, lit.

I love the fact that this thing looks so much like Tekkaman Blade, and I think the 00 Blade is a better looking mech that the 00 Gundam in its original colours! The modified Swifles are less awkward-looking than the originals, too.

I would recommend this kit to anyone who likes Gundam 00 or Tekkaman Blade. Who knows, maybe somebody out there will see some other mech reflected in the 00’s shape! 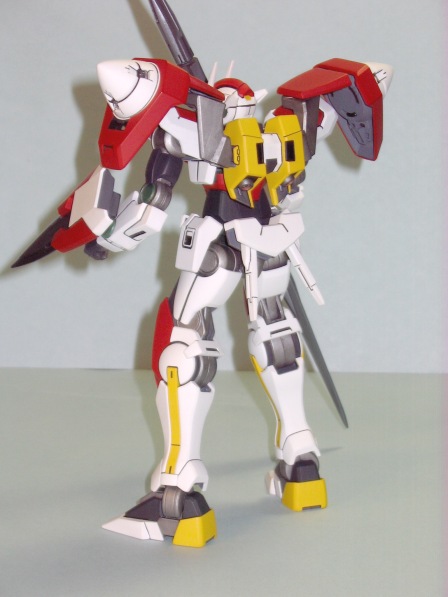 Even from the back, the 00 Blade looks a lot like Tekkaman Blade. The smallish backpack is done in yellow to mimic Tekkaman’s yellow thrusters. Same with the heels.