Given that it is the newest of the Gundam franchises currently on TV, it is no surprise that Gundam AGE has been generating a lot of model kits. What is surprising is that this series has returned more to the roots of Gundam, in that there is only one Gundam (per generation) and a lot of other supporting suits. Generally, it has been the marketer’s stance that kits of Gundams sell best; hence the large numbers of Gundam suits in series like Gundam Wing, Gundam X, Gundam Seed and Gundam 00. Throwing this to the wind seems to fly in the face of common sense, but it does seem to be working.

This is a short review of the first impressions left by the 1/144 High Grade Shaldoll Custom, a modified general purpose mobile suit in the AGE universe.

The first thing you see on a mech is the box, of course. This is traditionally an area where Bandai has always proven great strength, and the art on the Shaldoll Custom’s box is no exception. The box is typical of Age suits, clean and white with a nice “in action” picture of the mech predominating. The art is quite striking; full of action and implied suspense.

Dynamic, snazzy and yet surprisingly simple, the art on the HG AGE kits never disappoints.

Lifting the lid, you are greeted by a surprisingly small number of parts. There are two clear bags holding three racks each, although one of these is the polycap rack and the other has only two beam sabres on it. The racks are quite colourful, though; there are two grey racks, one whitish-green rack and one of part grey and part Kermit-the-Frog green. It is this last rack that really stands out!

The moulding is excellent and there is a surprising amount of surface detail, especially on the legs. The hands are nicely moulded and there is no flash anywhere on the racks. Surprisingly, the visor is NOT done in clear, as I would have expected. It is a bright blue piece over which a self-adhesive decal in metallic turquoise is to be placed. 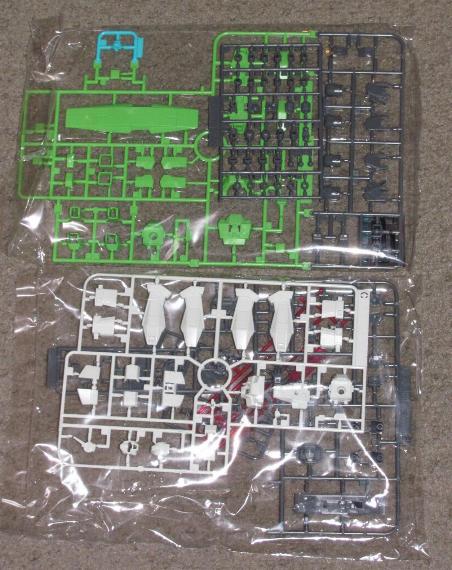 Here’s a look at the racks in the Shaldol Custom. It is very colourful and very nicely moulded. It might be simple, but it looks fun!

The instructions are typical of the AGE series of kits; simple black and white instructions with line drawings for individual parts. Completed subassemblies are rendered from 3-D modelling software. This works well, and is only a feature of these newest kits. There are full colour views of the completed kit as well, ideal for painting references.

Looking at the instructions, this kit looks quite simple and straightforward. You have to put the eyes in before gluing the head together, though, so masking the eyes for painting will be a problem. Same for the shoulders and the upper arm; Bandai still can’t get away from this issue, even after almost 30 years! Everything else looks like it was well thought out, though, so even inexperienced builders and painters shouldn’t have a problem.

The instructions, like all Bandai kits, have lots of nice, full-colour views, so if you want to paint the kit (and who wouldn’t) you have a great guide!

One bone of contention that has been dogging the AGE series kits is that some hardcore modellers feel they are too toy-like. Granted, this is a simple kit, and the description on the box does make a big deal about it being “fun to build Gunpla” (a portmanteau for GUNdam PLAstic model), but that’s no reason to get your kickers in a twist. Sure, this kit is optimized for less-experienced builders, but it looks poseable and well-detailed, so even experienced modelers will be able to make something nice from it. So, it’s easy; don’t look a gift-mech in the visor!