After World War II, it was made apparent that anyone wishing to entertain pretentions of global power had better have the transport fleet to back it up. The previous World War had been truly global in scope and nature, and the concept of logistics had develpoed from a somewhat vague notion into a finely-tuned science. The US had been forced to develop ever more massive and capable aerial transports for the war in the Pacific, and the Germans had realized the need for heavy airlift in the form of the (albeit less-than-stellarly-successful) Me 323-Gigant.

However, the other major powers really only had converted bombers to use for transport needs, unless they wanted to buy from the US. The French, always independently-minded, decided that they would rather develop their own airlifter. The result was the Nord 2500, which was developed into the 2501, christened Noratlas.

The Noratlas prototype flew in 1949, and the production aircraft entered service in the ’51-’52 time period. Its mission was to replace the aging and largely inadequate DC-3/C-47’s in service at the time. Despite the aircraft being sound, it was only used by Germany, Portugal, Greece and Israel in addition to the French. Ironically, the Israelis didn’t even want it, but were more or less blackmailed into buying it. However, once they used the plane, they were quite glad they had it.

As with most non-Mirage French aircraft, the only company to make a model of this twin-boom airlifter is Heller. There are two versions of the Noratlas in plastic. One is a 1/72 offering and the other is a tiny “Cadet” class kit in the nearly-never-heard-of-or-seen scale of 1/170. So, which do you think I chose? Of course! The old tiny one! Let’s see what you get in a box no bigger than two packs of cigarettes, shall we?

The 1/170 Noratlas was first issued in 1964. It was reissued with nicer, cleaner box art in the 2000’s some time. That’s the issue I have. The box art is a nice drawing of a Noratlas on a paratroop drop. It’s nothing special, but you get a feel for what the plane does best, and given that you don’t have a lot of room on the box to start with, it’s pretty effective. 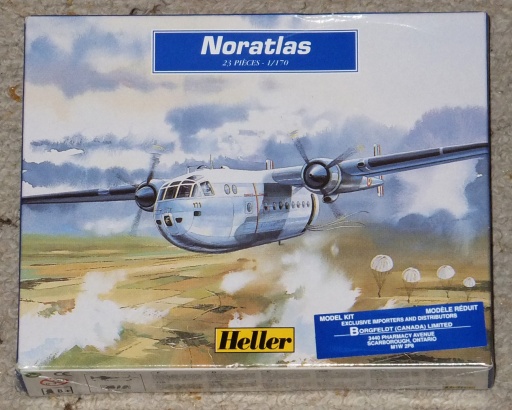 This is the box. It’s nicely illustrated and you can’t say they left any white space on the lid!

The box is similar in style to that of my 1/72 “Heller” (nee Airfix) Bf-109G. As you know from reading that article, I should have been very, very wary about picking up anything in that style of box. Of course, I don’t learn so well, when it comes to models. Both have the small blue square telling you the plane and scale on it, and the rest of the lid is largely left alone. There aren’t any pictures of the built kit anywhere, though.

The box is SMALL. It’s smaller than the box on a Western Digital Passport External Hard Drive. It really is about the size of two packs of cigarettes, but is likely to be far worse for your mental health, if not your physical well-being.  There’s not much else to talk about outside, so let’s crack it open and see the horrors that await!
Tally Ho!

Oh man. The first thing that hits you when you open this kit is silver. Yep, the kit is moulded in that nasty, old-looking silver plastic. I don’t know why they do this, but it really makes the kit look old. Of course, it is old, so that’s okay in this case.  The next thing I noticed was that the wings are a single piece, and they stretch corner-to-corner in the box. That means that even this tiny little model has a wingspan greater than most 1/72 WWII single-engined fighters. 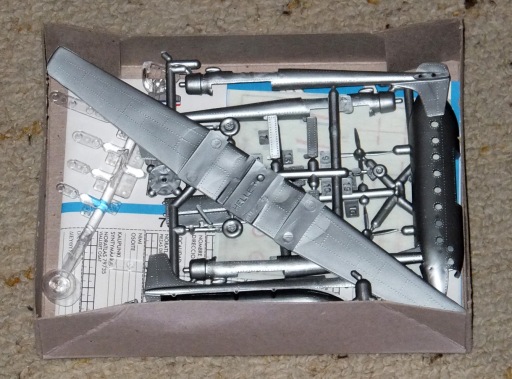 The wings go corner-to-corner in the box, and just fit. This level of efficiency is required, since there isn’t much else in the box, and a larger box would be wasteful.

One thing is for sure; there isn’t a lot IN this box. The wing takes up space, but the body is small in comparison, and there are only two small racks of silver parts. There’s also a sprue of clear pieces, including the round porthole-like windows on the side and the entire cockpit canopy glazing. There’s also a nice decal sheet (typical Heller) and a HUGE instruction sheet. 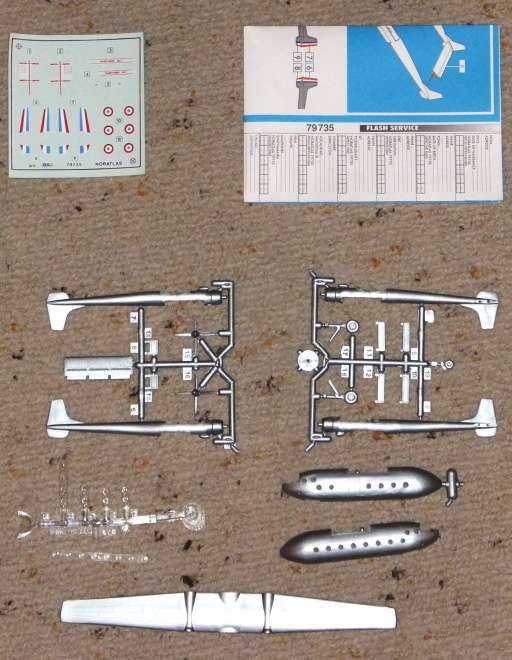 Here’s what’s in the box. The instructions are the biggest thing in there by far! 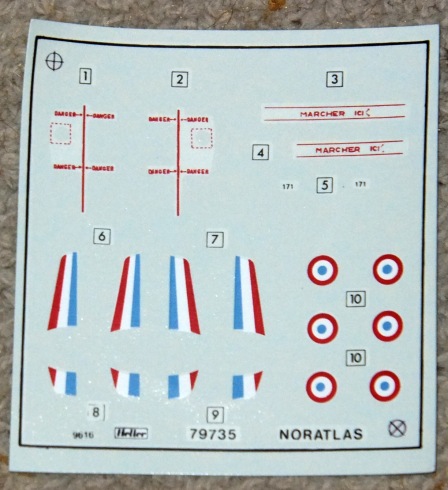 Despite everything, you can’t argue with the decals, that look nice. That’s why it’s good that this is the 200x issue of the kit.

I can’t help but laugh at the instructions. This kit is simple. You can see that from the tiny part count. However, despite this, the instruction sheet is gigantic. It unfolds to about the same size as those for Bear Bait, and far, far larger than for most aircraft kits in ANY scale. Why you need such huge pictures of such simple assembly drawings is beyond me. However, it adds a nice comical overtone to the entire package, and I like a good laugh as much as the next guy. 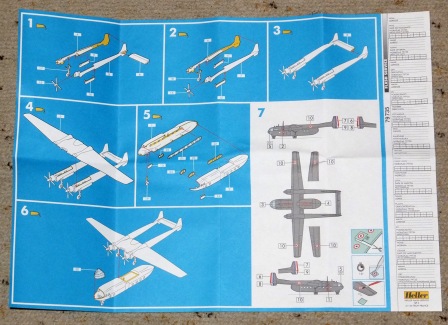 The instructions are WAAAY bigger than the kit, so they’re actually over-scale. They’re clear, but then again, there’s not a lot to this little bird.

The moulding appears neither crisp nor precise. There’s some flash, and there are lots of MEGARIVETS all over everything. Yes, I hereby coin the term “megarivet” for any scale rivet that would be larger than a head of cabbage were they to be reproduced on a real plane. There are megarivets everywhere; around windows, randomly on the wings and tail… it’s a real megarivet jamboree. Again, from 1964, this is what I expected; I do hate being right though, sometimes. 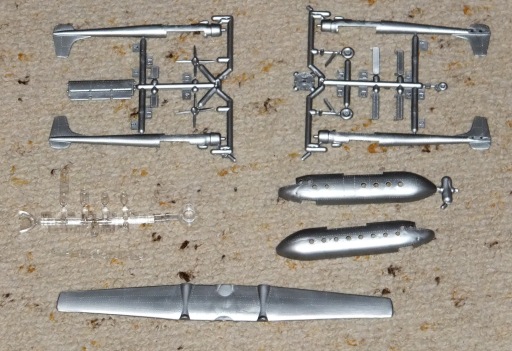 They said 23 pieces on the box and it doesn’t appear they were lying. this is it as far as parts go.

Assembly looks very simple, and there’s no interior and no cockpit. There’s also no real landing gear bay for either the main or nose gear. The parts look thin and pretty fragile, especially the props. A test fit of the body and wings reveals: PAIN!!! (Use your best G’n’R voice for that one, boys and girls!) Using the term “test fit” is very generous, since that is the last time “fit” should be uttered around this thing. The parts don’t mate well, and there are big gaps between the body halves and wing box. 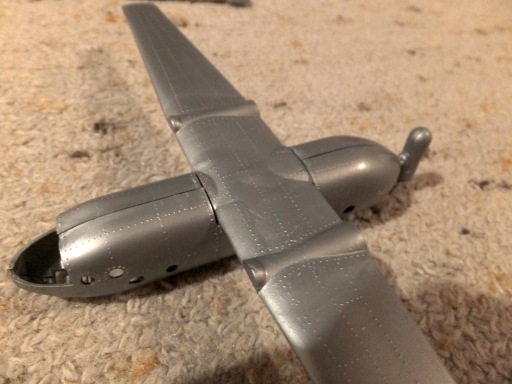 Yeah… So this is the fit on the wing and body. Not so good. This is a fun little toy in itself, though. Click on and expand the picture to get a face full of megarivets!

So, here we have a real little chestnut. When you think that this kit is now 50 years old in design, you can cut it some slack. However, that doesn’t make it any easier a kit to build or finish, so I think this is one of those kits that only wackos should attempt. It’s okay for kits who have no expectations, don’t mind bad fit, and don’t even care if some parts break.  It’s not really okay for anyone who doesn’t want to sink immeasurable amounts of time into a tiny kit of a somewhat obscure airlifter.

Of course, I am such a fellow, and I’m kind of jonesing to build this thing. That may pass, though. “Why did you buy it?” you ask. Well, two reasons. One: I’m a glutton for punishment. Two: it’s in scale to the small Arii Macross VF-1 Valkyrie kits of the 1980’s, and I have some of those. Now at least I have a real-life reference for them!

As a note: assembling the wings and body, like I did, makes for a fun toy. I’ve literally spent 10-20 minutes just imagining it as some kind of weird sci-fi glider and enjoying flying it around as I lay on my family room carpet. That may be the most fun nearly anyone is going to get out of this thing!