In North America in the mid 1980s, we considered the Honda Civic to be a small car. In fact, many considered it to be almost too small. It would have blown our collective minds if we had known about the Honda City, which was even smaller. I can hear the choruses of “shoebox on wheels” and “piloted rollerskate” already.  However, there was a ‘80s Honda that was EVEN smaller.

That car, which would have likely been derisively compared to a Hot Wheels car, was the Honda Today. This is what the Japanese call a “kei” car (not like our K-cars, which were admittedly pretty crappy…), something that is below the supercompact class, but above a cycle car (but not by much).

Of course, because it’s a mid-80’s Honda, there is a Tamiya 1/24 model of it. It’s under the “1/24 Sports Car” series, but I don’t think that too many people would be fooled into thinking something this small and gutless (28 hp!) was a sports car. Consider, if you will, that the engine is HALF of a Goldwing’s engine, and you get the picture. Maybe it IS a cycle car after all… or at least half a cycle car. Does that make this the same thing as a powered unicycle? I think it does… 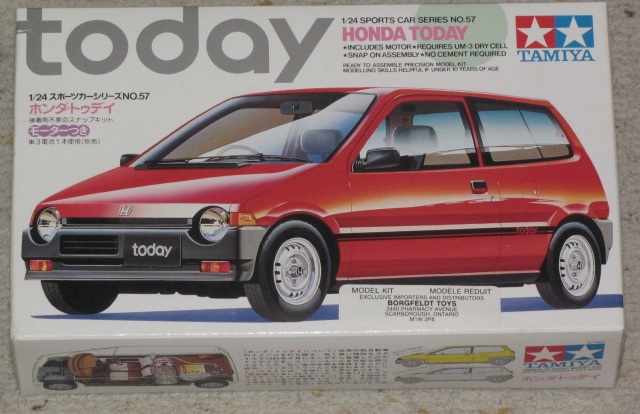 Look how cute he is! The Honda Today was Honda’s “kei” class car in the 1980’s. Driven primarliy by single women, it was a perfect urban commuter box.

The box is typical Tamiya mid-1980’s Sports Car box. It has a white background and a nice illustration of the Today on it. It shows the various colours you can get the car in on the sides, and describes quite a bit in English.  What struck me, though, is the SIZE of the box. It’s TINY! In fact, it’s no bigger than the box of a small 1/72 airplane, like the Heller Saab J-21 or the new Airfix Spitfire F.22.  I’m used to car boxes, even those for Japanese cars, being bigger than that!

The Kit and Instructions:

Inside the box, the silliness continues when you see that the body of the car takes up the full width of the box. Not the length, the WIDTH!!  Holy moly, this car is small… There are nice rubber tires and the glass looks fantastic, as always. Tamiya kits really understand how important windows are on a car; they’re always carefully packed and perfectly clear, unlike American car kits, where one finds the windows chucked loosely on top of other parts, just asking to be scratched or worse.

That’s what you see when you lift the lid. The body of the car is the tiny red thing at the bottom.

The kit is a curbsider, so there’s no opening hood. There are very few parts, and the kit looks very easy to build. I love the wheels you get with the Today. Some of the Tamiya Hondas come with fairly nice wheels, but the Today only has what can best be described as POS steel rims, hereafter to be known as POSteelies.  They are tiny, ugly, style-less little buggers, and the best part: they’re moulded in grey! This is the only Japanese car kit I’ve ever seen that DOESN’T give the wheels an aluminum finish. You know you’re a base model when… 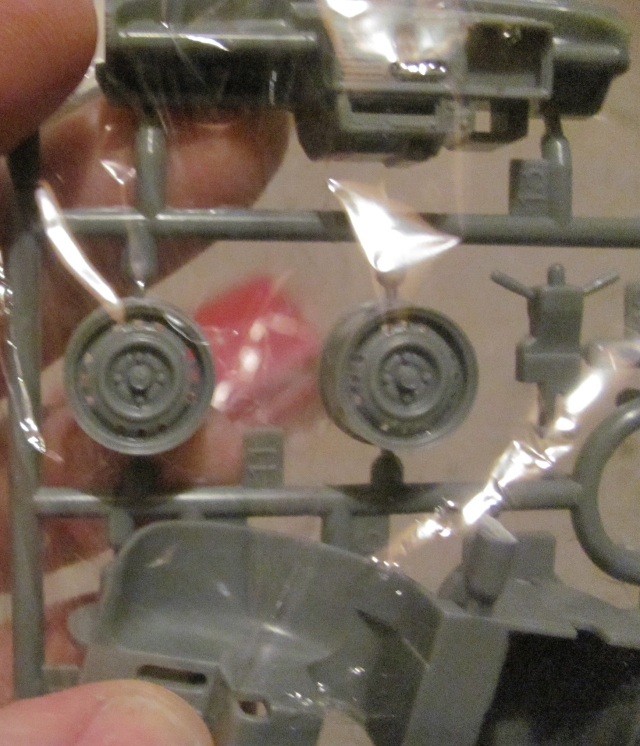 Check the wheels! So basic that they’re not even chromed or anything. Sheesh…

This is a good kit of a weird car. It sure won’t take up much shelf room, so if you can find one, I say go for it!

It’s all about perspective. The red one is the Today, which North America never saw. The white one is a Honda Civic (1985-ish), which North America did see, and which was considered very small. The black is a 1987 Trans/Am GTA (same scale). That’s an American sports car vs. Honda’s family sedan and commuter car. Yowzaz!