It’s tough being the “bad guy”. You always get shot at, and often get blown up. Nobody cheers for you, and except for rare exceptions, you’re nowhere near as popular as the “good guys”. Even in anime, where the concept of the “good guy” and “bad guy” are much more nebulous, this is still true. Ask any MS-06 Zaku variant from Gundam; they are just there to act as cannon fodder for the protagonists; their sacrifices often serve little more than to make the “good guys” look even better.

Because of this, there was period in which Bandai actually more or less stopped kitting the generic enemy machines from their various animes. This was around the early- to mid-1990s. Only more recently has this trend been reversed. However, there was a time BEFORE then in which it was a given that the generic mecha on both sides would be kitted. It was EXPECTED that there would be a balance. If you look at the roster of kits from the three first Gundam series, you can see exactly what I mean. While it was found that Gundams sold much better than non-Gundams, it was still a point of pride to offer a complete lineup in plastic form. The fact that these days have returned implies, to me, that this was the correct tack all along.

One series that followed the “kit ‘em all” philosophy was 1987’s Metal Armor Dragonar. This show, sadly, is now largely forgotten. In its day, however, there were very great hopes for it. Indeed, Bandai intended to create a new anime empire based on Dragonar, the way Gundam had held audiences in sway for previous 8 years. At the time, no one could have imagined a single anime franchise reaching 35 years or more of longevity.  Because Dragonar was to be the “new Gundam”, Bandai planned and produced a large variety of kits from the series. If you want to see the bulk of them, you can check out the range on my “Scores and Collections” page.

One of the may enemy suits produced was a flying mech (called a “Flug Armor” – how Germanic!) that blended the aesthetic of futuristic aircraft with more traditional mech design. In fact, the machine in question, named the Schwalg, looks very much more like a Gerwalk-mode VF-1 Valkyrie than a normal mech. The design is very interesting and quite a bit different from what you see in mech designs today. Because of that, I decided to make the Schwalg the first Dragonar kit I would dive into.

All of the Dragonar Boxes have the same design aesthetic, as you can see from picture on the Collections page linked above. The white border sets up the box art nicely, and the text is all against white, making it easy to read. Some of the writing is even in English, despite the fact that these were not intended for export. English was and is trendy on boxes, and the Schwalg’s is no exception, it seems.

The great part about the Dragonar boxes is the art. Unlike a lot of modern mech art, the drawings are not done to look like the anime. They’re more like paintings of legitimate machines than cartoons. This alone makes them interesting pieces to look at, but what makes the Dragonar art so different is the sense of action generally portrayed. A lot of the mecha in the series are depicted “in action”, so either under fire or during hard maneuvering.

The Schwalg is no exception to this rule. The box art shows a Schwalg pulling up hard from what is likely a bombing or attack run, since there’s also an explosion on the desert surface below. That in itself is kind of neat, but it’s the details, like the contrails coming of the wingtip-mounted missiles, that make it stand out. Even more interesting is that the background hasn’t been neglected, and you can see the Schwalg’s wingmate punching off his tanks and getting ready to get into it. “Fight’s On!” comes to mind! It’s also neat to see the Schwalg’s two modes in one piece of art. For flight, the legs can tuck up tight under the body, and the wingman’s machine is in this configuration.

This is the Schwalg’s box art. It’s got a good, old-school vibe while still being clean and artistic!

Overall, the box art is a lot more reminiscent of Matchbox or old LS art with its “war art” qualities and sense of movement and excitement. I must admit that I didn’t think the art on an old mech kit would be this impactful, and I prefer it to the overly busy box art found on modern Gundam kits.

On the sides of the box are different pictures of the Schwalg from the front and back. There are two pictures per side. One side shows just the normal mech standing there, looking cool like you’d expect of a fighter/robot chimera. The other side shows the Schwalg all tucked up in flight mode as well as giving you a demonstration of the kit’s poseability. By today’s standars, it’s not much, but back in the day, being able to move as much as they show was actually quite an accomplishment, especially given the minimal number of Polycaps used.

One side of the box shows some of the kit’s suprising poseablity.

The other side shows more likley how the Schwalg is going to look on my shelves. Still cool, but not as dynamic.

The Schwalg is a lot like other Bandai mecha of the time, yet at the same time it is also quite different. It comes on a couple of racks of plastic that is almost Model Master Acrylic Dark Tan in colour, as well as having a rack of a purplish-grey. The polycaps are a lighter grey than those normally seen on Gundams, but they do get close to being the same as the bluish- grey plastic. There are no clear parts at all, and most of the pieces are pretty large. 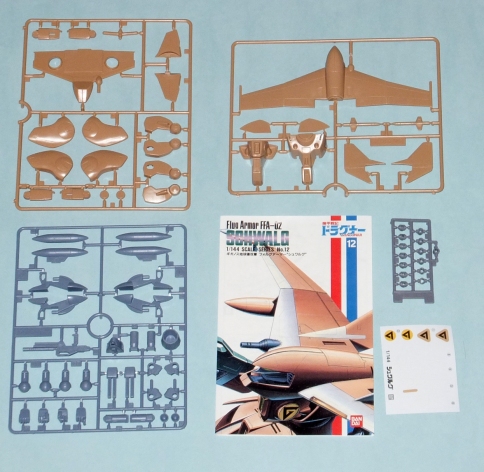 As you’d expect from a mech kit of this age, the major subassemblies all come in halves. This  has the potential to be both good and bad. Thankfully, most of the subassemblies can be finished and assembled at the end. This is good engineering. It’s terrible when you’re faced with a lot of “buildaround”; this is when you have to finish something completely before moving on to the next assembly that is built around it.

Overall, I was very impressed with the design and implementation of the kit. It has a far better build order and far less buildaround than Gundams from the same time period. Almost all major subassemblies can be completed separately and mated at final assembly. The upper body/head/fuselage is an exception, and that may prove to be problematic. However, legs and arms look great from the separation point of view!

While it’s not hyper-detailed or anything, the Schwalg has a few panel lines on it and some bumps and bulges that will help to give it some character. The engine nozzle looks nicely moulded, except for the fact that it has just a flat face at the “end” of it. Some turbine detail might have been nice here, but beggars can’t be choosers! There are also a few vents on the mech to give it some detail, including two back on the fuselage that look like bleed vents for boundary layer air! Picking these little things out in metal shades should make them look pretty good. 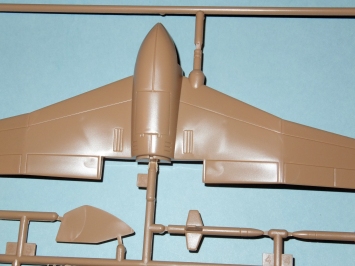 It’s not a lot, but the Schwalg’s detailing is nice, what’s there. Details like the vents by the “fuselage” add realism.

The kit itself feels fine; the plastic is of high quality and there’s no flash anywhere. Given the moulds are almost 20 years old, that’s not bad! Overall, I get a better impression of this model than a Gundam of similar vintage. One major reason; stickers! Yeah, I know… I always lament stickers and say they’re terrible, right? Right! The entire white leading edge is give as a set of decals, but none of the white on the stabilizer fins are. Why is this better? Well, its’ because Bandai also provides pane lines for the colour-differentiated areas. This is totally unlike a Gundam, where it was either do the colour with decals or freehand it. The Dragonars give you lines so you can paint within them!

The decals are all the standard Bandai self adhesive-type. I think they’re foil, from the look of it, but they are matte in finish. There are leading edge strips as well as the “G” for the “Giganos Empire” that fields the machine.  Sounds like a good badguy name, right? Two of the Giganos G’s are on yellow backgrounds; these are for the cockpit hatch doors, which are down low on the chest. On Dragonar mecha, the cockpit is a tube that slides partway out to open up for the pilot. The yellow parts are the ends of that tube.

The decals, as usual on a Bandai kit, are “meh” in the extreme. I won’t be using them.

The instructions are beautiful. Just like others from their time, they have a piece of art on the front and a colour painting guide on the back. In the middle, is a full colour spread. In this case, the weapons are highlighted, along with a history of the Schwalg and a nice labelled cutaway of the Schwalg’s top half. The drawing on the cutaway is amazing; it looks like something right out of a plane book. It says a lot that the people at Bandai and Sunrise (who animated Dragonar) went to the trouble to so fully realize their fictional machines. That’s always a good sign; it shows they care about the product!

The kit may not be super-detailed, but the instructions give you a cutaway of the “real” thing. This is how you know things are well planned-out!

The instructions themselves are very simple and clearly laid out. There’s not a lot to the Schwalg, piece count-wise, so there’s little to clutter up the line drawings. Everything is straight forward, and even if you don’t know any Japanese (like me, basically)  it’ll be easy to see what goes where.  The instruction booklet is small, to fit the box, but it doesn’t need to be bigger.

The first few steps look easy. The instructions are clear and uncluttered.

The buildaround on the body might be an issue, but the rest still looks simple enough.

Dragonar is actually a pretty awesome show. Having seen it and then finding out there were kits from it was a great feeling, which lead to a sad realization that I’d likely never be able to find them. Thank goodness that I was able to find them ALL, on sale, at a particular online retailer. The kits weren’t expensive at all, even including shipping they averaged out to about $11 each.

While the Schwalg is a simple kit, it should build into a mech that is definitely something different from the ordinary piloted robots we’ve come to expect. It’s nice to have an easier kit for a change. I can recommend it to anyone who wants to try something new, or who has a love for cool robots. I don’t see that inexperience will greatly hinder a given builder.

Overall, this is a cool and slightly unusual kit from an anime that never quite got the love it deserved. If you see one and like the design, get it. There’s no good reason not to, and it will be a fun retro modelling and anime experience!