It’s impossible not to be impressed with the ingenuity of the German aeronautical industry during the period of Nazi rule. Sure, there were backroom politics a-plenty that effectively assured no advanced types would make it into large scale service in time to change the war’s outcome, but the sheer volume and creativity of Germany’s designers is amazing. Even more amazing was that some of these advanced ideas even managed to make it to the hardware stage, albeit in small numbers, before the curtain fell on Hitler’s “1000 Year Reich”.

One of the more promising types to make the leap from napkin to flying machine was Dornier’s Do-335 Pfeil. With a push-pull engine arrangement, the large, heavy-looking and brutishly-styled Pfeil was surprisingly fast and was a far better candidate for a heavy fighter than almost anything else the Germans could come up with.

It’s no surprise that the Pfeil has long been a staple of the modelling industry. Despite the fact that it’s got a lot of “what if” charm to it, it’s also appealing to modellers of “real” planes, since there were many pre-production examples and test birds in action at the end of the war.

Old FROG kits really had it going with the boxes. In fact, most old models did. Nowadays, there are too many photo boxes and clean illustrations. Back in the day, though FROG could really generate some excitement with the box art on its kits. All of FROG’S boxes seem to convey a sense of action and excitement, and even now make you want to buy the kit.

The Pfeil is no exception. The box shows a night fighter version of the plane (even though this two-seat arrangement wasn’t really designed for night fighting). The guns are blazing and the ground below is lit up by an eerie orange glow (Iikely a burning city) while searchlights frantically probe the sky for Allied invaders. (See the Lanc at the bottom left of the box?) The style of art reminds me of what you would see on a 50’s dime action novel or a pulp magazine, so full of implied action and suspense that it transports you.

Strap in! The Pfeil’s box art may be the most detailed thing on or in the box, and is definitely the most exciting. Old box art just rules compared to most newer stuff.

The box itself comes in a few flavours; one has a hinged lid, the other has a normal lid that just lifts off.  On each box, the back is full colour, and has a painting guide for two aircraft; one German and one of the planes captured and tested by the British immediately after the war. I don’t know why FROG changed the box styles, but I definitely prefer the “normal” type of box to the one with the attached lid.

Two kits, two colours, two lid designs. No idea why. Variety is the spice of life, it seems!

Unfortunately, neither box is all that well-built, so care will be required in handling either style. Like all FROG boxes, the Pfeil’s is made of fairly thin cardboard, and over time it has tended to warp and bow with humidity and temperature changes.

The Pfeil is typical of FROG kits. The surface detail is actually very nicely done. Unlike SOME makers, (<cough> Airfix <cough>) FROG thought it unnecessary to improve realism by defacing the surface of the airplane with a double-dose of completely non-aerodynamic, head-sized rivets. The result is that the Pfeil, and others, are quite clean kits.

The panel lines are all raised, of course, but it’s nothing a little time with a scriber can’t cure, and the lines are all well-defined, straight and nicely done. You could even leave them if you wanted to, but for me, that’s just not right. The amount of detail beyond the lines, though, is minimal. You don’t find hatches and other fine detail on FROG, and the Pfeil is no exception.

Here’s what you get! Not a lot of detail, but the basic shape is right, and there aren’t any rivets!

The same approach is seen in the landing gear bays and cockpits: minimalism is the watchword here! There is a floor, seat and stick, and that’s it. Thing is, the cockpits don’t open anyway, so why go to all the trouble of superdetailing? Just close the lids and you’re done!

My two Pfeils come in two different colours of plastic. I don’t know if this is a FROG thing or what, but I get the impression that it comes moulded in whatever they had on hand. One of mine is blue, the other is black. I have also seen a green one, if I remember right. Not that it matters, because you’re going to be painting it anyway, right?

The instructions are simple, on a fold-out sheet. There isn’t a huge number of steps to building any FROG and this keeps the instruction sheet simple. The diagrams are well laid out and very clear what goes where. There’s not a lot of writing on the instructions either, so even if English isn’t your native tongue, you’re not going to have a problem.

Extra! Extra! Read all about it! Well, okay, there’s not much to read, but the instructions are simple and get the job done, so Kudos for that!

The best part of the kit, especially for me at the time I bought it, was the decal sheet! It comes with markings for both the German and British-impounded plane. That’s pretty cool in and of itself; decals for “captured” warbirds are quite rare in a kit now! Even better, though, the kit actually came with the Swastikas (Hakenkreuzen) for the tail! You don’t find that in a lot of kits now, well at least not Revell Germany kits. That’s ironic in several ways: a.) This kit, like many others was, in fact, reissued as a Revell Germany kit in the mid 1980’s, but without the Hakenkreuzen, and b.) Isn’t it the Nazis that we always accuse of rewriting history? (That’s a separate rant… to me, proper decals are a MUST!) 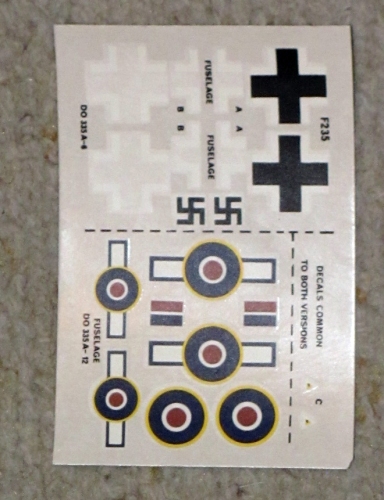 The Pfeil’s decals are basic, but interesting. Not only do you get British markings, but you also get Swastikas! Score one for historical accuracy!

The FROG Do-335 Pfeil is a simple kit of a really, really cool, bizarre and surprisingly important plane. Sure, it will need a lot of work, but it is a superdetailer’s dream (basically a blank slate) and it’s also great for a What-Iffer. There were a lot of Pfeil-based projects, and of course, you can always dream up your own…

This is a bad kit for even beginning modellers, though. It is a bit crude, and the fit will, like most FROGs, leave a lot to be desired. It will not be a simple kit to build right, even though there aren’t that many pieces. Unless you’re giving this to a young modeller who just doesn’t care about those things, I wouldn’t encourage a green modeller to tackle this thing.

Still, it’s a great kit to have, even if only for the box art!