The Hawker Hunter is one of the most successful British post-war jet aircraft. Like the Vampire, the Hunter was widely exported and served with many nations in a second- and third-hand, often rebuilt, form. The last Hunters were still in service in the late 1980s and early 1990s, which is a tribute to just how well-built and well-performing they were. While only a transonic design, the Hunter survived because most tasks don’t require the complication of supersonic speed. For less-prosperous air forces, such as those in the Middle East (until recently, of course!) and Africa, a highly capable, tough and proven aircraft such as the Hunter was an ideal choice.

Because the Hunter represented a nearly global warplane, it’s not a surprise that it has been kitted in a number of forms and scales over the years, and that there is lots of aftermarket for it. Due to it being one of the greatest British aeronautical successes, it’s expected that model makers from the UK would kit it. In fact, Frog, Airfix and Matchbox ALL kitted the Hunter, in various marks.

However, just a plain-Jane Hunter isn’t very interesting, at least not to me. Now, on the other hand, the awkwardly sedan-like two-seater is a real turn-on! In the very odd British tradition, it was decided that the two-hole Hunter would be a side-by-side aircraft, the same as the Vampire T.11 before it and the Lightning trainers that would follow it. While this gives good communication between student and instructor, it makes for a rather oddly bulging front end. This always produces some very interesting looking variants, and the Hunter is no exception.

When I first saw the two-seat Hunter T.7, I fell in love. It may be the very sexiest of the British “bench seat” two-holers!  When I found that Matchbox was the only company to have made a kit of this version, I was even more excited. I HAD to have one. Thankfully, I was able to find one in Oakville, Ontario!  Let’s see what we’ve got, eh?

There are a few versions of Matchbox’s Hunter T.7, but all are “two-in-one” kits that allow you to build either a single or two-seater aircraft. The first issued was a T.7/F.6 kit. This came out the same year I was born; 1976. There were a couple different variants of this, and then in the mid-1980s, another version that could make either a T.7 or FGA.9 was issued. Finally, one that could make a T.7 or F.58 was issued later, perhaps in the 1990’s (at least according to www.Scalemates.com).

The version I found is the T.7/FGA.9 version, which is very interesting because it is designed to build into a T.7 from the “Blue Diamonds” demonstration team. It’s rare to see any non-Red Arrows demo team kits from Britain, so this makes the Matchbox kit a novel undertaking. In addition, the box I have must be some kind of international pack, because there’s German on one end and French on the other!

As is typical of Matchbox kits of this era, the box rocks! You get a nice picture of the Blue Diamonds aircraft overflying an airport, and the signature “sunset stripes” of the Matchbox company framing the shot. The starkness of the black vs. the colourful striping is very attractive and pulls your eyes in, which is one reason I love Matchbox boxes. They also scream late ‘70s/early ‘80s Street Freak, so that appeals to the vanner in me. 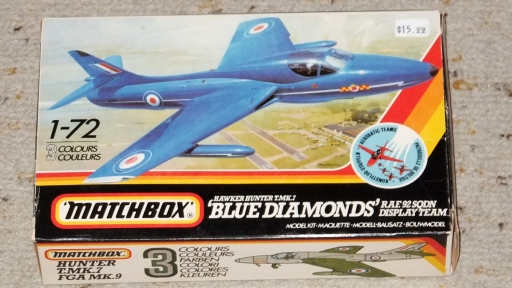 With its snappy oh-so-80’s sunset stripe and bold use of colours, it’s easy to almost gloss over the fact that you’re seeing a Blue Diamonds Hunter T.7 on the box lid. Note the “unpainted” model drawn on the side. That’s what your 3 colours will get you!

Like all Matchboxes, the kit is moulded in several colours, and the box grandly proclaims that this one comes in 3 colours! Man, you know you’re in the big-time when you’re a three-colour kit! As usual, on the side of the box is a drawing of an “unpainted” model, so you can see just how your three colours break down. The back of the box shows the two paint schemes (one FGA.9 the other the Blue Diamonds plane) and decal placement. There’s no window on the back of this box, which is great; I hate those things. They always seem to be torn, and they’re a great “escape hatch” for canopies and other loose bits, never mind letting in dirt to ruin the decals.

Here’s the (thankfully windowless) back of the box, with full colour views.

The best part of the box, though, is the end-flaps! They’re different from one another! Normally, the end flaps are the same, but on this kit, one shows the FGA.9, the other the T.7. I love this, but it almost made me not get the kit. Why, you ask, if you love it, did you almost abandon it? The reason: I didn’t notice it at first. I was scanning the racks at the shop where I got it, and the FGA.9 side was out. I was looking for the very distinctive image of a T.7, so I didn’t even register the FGA.9 the first 18 times I passed over it. However, just before I was going to leave, I saw the band across the FGA.9 nose, and saw it said “Patrouille de Voltige” on it. I know some French, and it hit me that meant “Demonstration team”, so I thought maybe it could also be built as a two-seater. Sure enough!

This is one end of the box; German wording over a T.7. 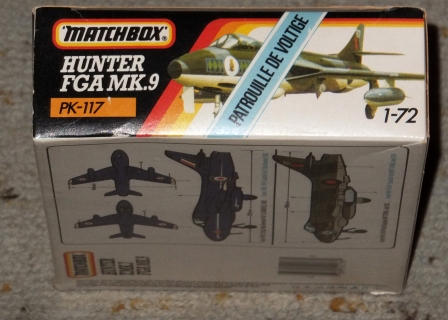 This is the other end of the box: French writing over the FGA.9!

After purchasing the kit for a pretty good price (not what the sticker says, thankfully!) I was eager to see what the kit contained.  I found that it was typical Matchbox. Most panel lines were recessed, although they tend to approximate canyons instead of panel lines. There was some fine raised detail on the control surfaces of the wings, which I don’t understand. Why are the ailerons waffle-gridded? No clue.

The kit is simple, as expected, and has basic undercarriage and gear doors. There’s no engine exhaust nozzle (lame) and the cockpit is Spartan. So Spartan, in fact, that it consists of seats. Yep, that’s it. No instrument panel, no floor, just seats. This is a bit of a disappointment, but it can’t be helped. When you get a Matchbox, that’s what you expect; weird subjects, passable surface detail and nothing on the inside!

As promised (!) the kit did indeed come in three colours. There is a grey, a light green and a dark green sprue in the box. There’s also a clear rack with both the single and double-seater canopies. There are two sizes of drop tanks (fighters usually use the bigger ones, trainers the smaller), some rocket pods for under the wings and two different kinds of gun bulges. The T.7 has a single cannon under one side of the nose, while the FGA.9 has a pair of larger bulges to collect the links from its multiple cannons.

I was so excited that I started to glue the wings and cockpit together before I realized I didn’t have photos of it! So, the pics here show mostly how the kit came. Mine was unstarted when I got it, so the cockpit/nose and wings were all in halves. The fit seems passable, as expected, but there will definitely be some sanding to be done as this thing comes together.

Here’s what’s in that colourful box! There are three different coloured sprues of simple plastic, as expected. Nice canopies, too!

The canopies both look nice, if not a bit thick, and there’s a bit of (expected) distortion. However, the framing is pronounced enough that I shouldn’t have to re-etch them, and that’s a godsend in and of itself! I’m sure there are vacuformed single-seater canopies, but as for a thinner two-seater one, you’re on your own, I think.

The instruction booklet is small, because there’s not a lot to this thing. The instructions are clear and simple, and most things on this model are in halves. Typical Matchbox instructions are well organized, as are these, but they share the annoying trait of having the “detailed” painting instructions for things like pilots, cockpit and landing gear on the back page, rather than right where they’re installed. This is a minor quibble, I know, but it drives me nuts.

For the love of… I hate the “detailed” painting callouts on a separate page! Thankfully, there’s not a lot of detail on the kit, so if you forget to see this, you’re not missing much.

It looks like an easy build at first, but a few things should give a builder pause. Firstly, there’s no engine nozzle, so something will have to be done about that. One thing the instructions don’t convey is that the intakes are hollow. Now, they bolt onto the body (since they’re at the wing roots) so you can’t see into the fuselage from them, but you can see into the gear bays. Again, something needs to be thought of to rectify this situation. 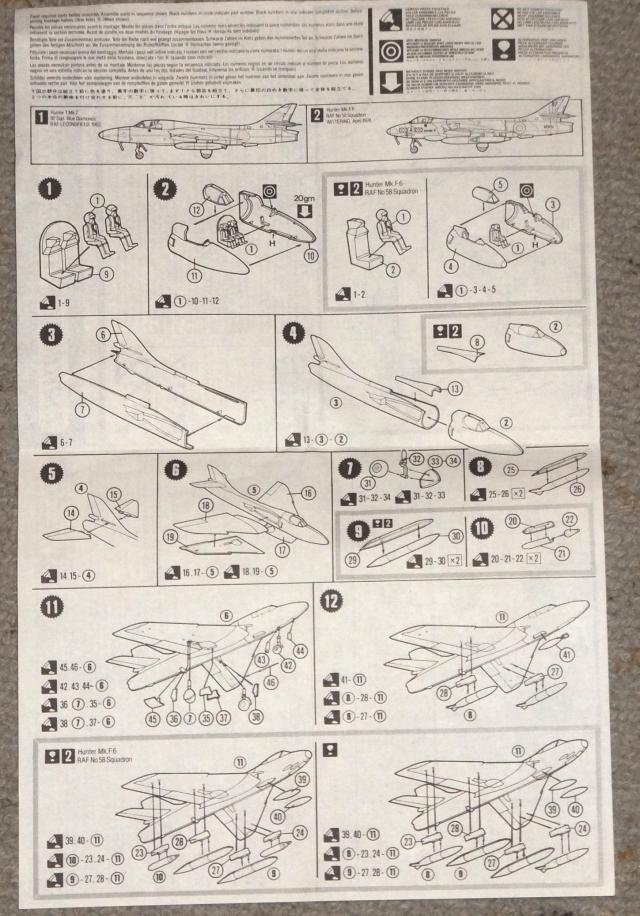 Here’s how it all comes together! Not that it’s a real piece of rocket science or anything, but the instructions are nice, as usual for Matchbox kits.

The decals are nice and are provided for both variants. Mine were in good shape, and I’m sure they’re typical Matchbox decals in that they’re super tough and very flexible. I love Matchbox decals; they are seriously some of the best in the business, much better than decades newer decals on Revell Germany and even Hasegawa kits.

I love Matchbox decals. They do give you an instrument panel decal, but you really won’t see it (I don’t think, at least).

The Hunter T.7/FGA.9 looks like a fun, simple kit, and the fact you can actually get a 1/72 Hunter trainer without the bother of a conversion set is absolutely awesome. This kit would not be a problem for a very inexperienced modeller; the old Matchboxes were almost made to be gluebombs! For that alone, I greatly respect Matchbox kits; they are what kits were supposed to be. They’re simple and fun for a kid to build, maybe play with and likely eventually destroy. This is a kit you could hang from a light in your bedroom or fly around the backyard. Well, it was.

Since it’s quite rare now, letting that happen would be a crying shame. The Hunter isn’t a good kit for someone who wants a superdetailed replica but doesn’t have a lot of experience. To get a good result is going to demand some skill, so this is another one of those “extremes” kits; it’s great for those with no skills/expectations or developed skills and a willingness to pour time into it. If you’re a casual modeller used to the Shake’n’bake world of Tamiya or newer Trumpeters, this one is not for you!

If you want a good, basic kit of a weird subject, though, Matchbox was, and still is, often the only way to go!  This is going to be a fun kit, I think, and a neat piece of modelling nostalgia at the same time. It’s great for anyone with an interest in British planes or earlier jets, or, if you’re like me, an interest in awkward two-seat variants!