One thing you rarely hear a modeller call a kit, though, is “cute”. It doesn’t seem to be in our vocabulary. However, if there was one word to describe the Hobby Boss “Easy Build” MiG-15 UTI Midget, I think “cute” would be it. I mean, the subject matter can hardly be described any other way. The Midget is a short, almost jovially chubby, little plane. I can’t help but think of some kind of Cherub/goldfish hybrid whenever I see one. It’s like the Crosley of airplanes! In addition, this particular model of MiG’s rotund little trainer is neither overflowing in parts nor grandiose in scale, but it is nice looking at first blush.

The MiG-15 UTI was one of the first widespread conversion trainers for jet fighters in the world. In many ways, it’s a lot like a Russian T-33 in role and importance (and engine, if you’re talking CT-133), but aerodynamically it’s actually much more advanced. The advent of swept wings and jet engine speeds made a conversion trainer for future fighter pilots a necessity. The Soviets recognized this and mass produced the Midget. Despite this, there hasn’t been a great number of models of the UTI produced, and none (at least recently) in the mainstream.

Some people deride the Hobby Boss “Easy Build” series because they are “too simple”. That definitely holds for the box art, which is actually some of the worst I’ve seen. In fact, the box art is so bad that it prevented me from buying this kit for years!!  Eventually I broke down (it was cheap, and it was a two-seater) and I’m glad I did. But more on that later.

Everything about the box screams “Cheap!” The font is funky and hard to read, and the superimposition of the wording on the questionable sky graphics is clunky at best. Worse yet, the actual image on the box is a none-too-well-built example of the kit again superimposed on the questionable sky. I can’t figure out if it’s supposed to look like it’s flying, or what. Regardless, it looks more like a “My first Photoshop” project than anything.  Compared to the beautiful art on a lot of Hobby Boss boxes of late, it’s a very sad, primitive and even questionably legitimate looking effort. 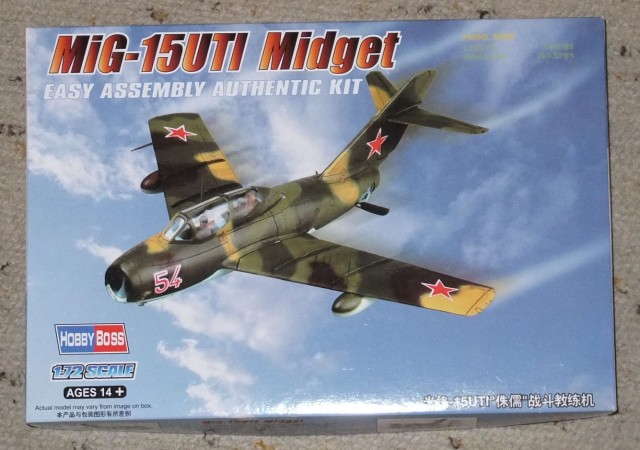 Wow… just wow. Could you DO a worse photoshopping job than this? I mean, really?? “Can you see the string?” Notice the blurring, because it’s going so fast! Very convincing, especially since the SPEED BRAKES ARE OUT! What the…?

If you’re trying to sell a kit, box art is the first impression you get to make. You don’t get a second chance. Like I said, I’ve turned this kit down MULTIPLE times due to the box alone!

Inside the box, things take a turn for the weirder, if you can believe it! The body halves (split top to bottom, not side to side), cockpit glass, wings and cockpit tub are all in a black plastic tray, similar to that found in Japanese collectible figure boxes. I’ve never seen a model come like this. The rest of the parts (a whole ONE RACK) are in a bag below the tray.

This is the weirdest, most convoluted packing that I have ever seen. I don’t know why Hobby Boss did this, but it looks interesting enough to make you forget the awful box art at least. 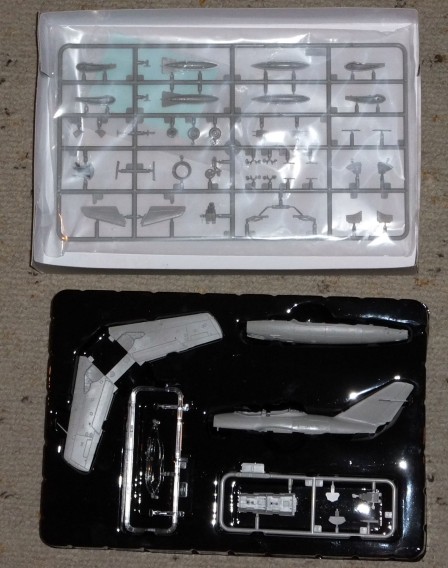 Here’s what you get in the box. It’s not much, and I think there’s more plastic in the oh-so-bizarre plastic tray than the Midget itself!

The actual kit doesn’t look too bad. There are a lot of nice panel lines, and while there are some surface imperfections, the kit isn’t as rough as you’d think. Sure, there aren’t a lot of parts, but it’s a small plane, too.  This one might suffer from “hollow intake” syndrome, though, so you might have to put a backing plate behind the splitter. Something to keep in mind, at the very least.

The cockpit tub is one piece, with control sticks already in. The seats are a separate piece, and while not up to superdetailing standards, they’re better than the L-shaped plates I’m used to from FROG! The wheel bays are moulded into the plane, and the landing gear don’t look too bad either, actually.

There is a choice of slipper-type or pylon-mounted tanks for under the wing (external fuel is de rigeur on a Midget) and overall, get an impression of decent fit and quality. 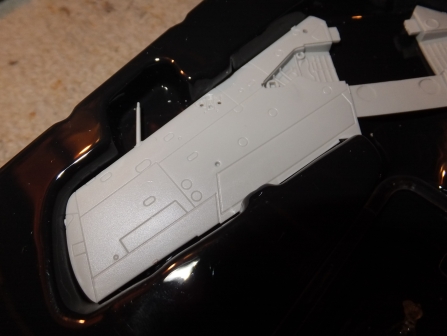 This closeup of the wing shows the level of detail on this kit. It’s actually pretty good! So is the fit! It’s only $10! Now, if only Airfixes fit that well…

I dry fit the body and wings together, and I’ve seen a lot worse. There will be a need for some sanding on the body halves, and I suggest cutting the one-piece wings apart in the middle so they can be inserted after the body is together. This will also allow you to correct the angle of the wings; I’m not sure yet if this is correct or not.

One thing I did notice on dry fitting the fuselage and wings was that there are not insignificant stubs on the wings, on the inside where they would meet the body. This prevents a great fit, but should be easy enough to sand off. While the fit of the body halves aren’t great, I don’t think it’s anything that a bit of excess glue and some sandpaper can’t fix.

There are decals for Russian and Iraqi versions, but given the ubiquity of the Midget in non-Western air forces the world over, the possibilities are almost endless. I’m sure we all have decals in the spares box that would be of use on this thing! There aren’t a lot of stencils on this kit, but a trip to the spares box will correct this problem.

The instructions, like the kit, are simple. There are a few simple steps to get your Midget together, but that’s about it.  There is a full colour painting plan for the two versions, but other than that, there isn’t much information. 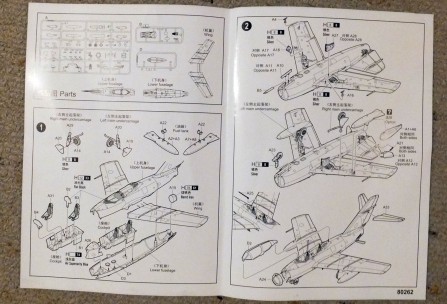 With a kit this simple, the instructions aren’t going to be hard to follow. The full colour painting plan on the reverse is nice, too.

The Hobby Boss MiG-15 UTI is an interesting little kit of a surprisingly important little plane. It might not have the glitz factor of some of its stablemates, but it is a good plane to have in any cold war or Soviet Aircraft collection, for sure.

This may not be ultimate rendition of this pudgy little bird, but it is passable at least, and seems like it could build up rather nicely. It should be a good build for anyone; beginners have a simple kit to work on, and the more advanced among us can have fun trying to superdetail it and clean up its deficiencies.

Even though it took me several years to break down and buy it, I’d suggest you don’t follow my lead. If you see it and don’t immediately dismiss it, then pick it up. Heck, paint it like a goldfish, if you want; it will still be money well spent!