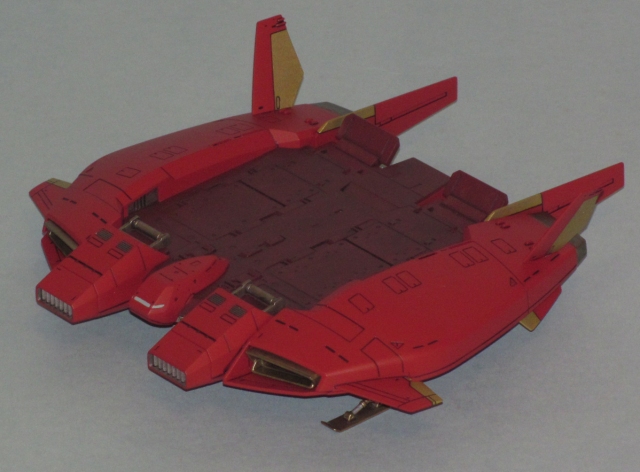 Here’s the third component! Now my Santa Gundam has a sled of his own!

So, here’s how this works.

One year, I made a Santa Gundam. However, as cool as he was, he really needed something to go with him. Thus, the next year I made a Reindeer for him out of a B’Cue.  Now that looked pretty cool.  A Santa and a reindeer, both in 1/144, both made from MS kits. However, it still wasn’t enough. My colleague at work (the same guy who helped me come up with the Santa idea) thought that I should have a sled. He wasn’t wrong, but I didn’t know what to do about getting one.

I mean, a sled would have to hold presents, which means I’d need something that was big enough to look “sleddish” next to an MS, while still being from the Gundam Universe. I thought of a Dodai (is there even a kit of that?) or Dodai II (they’re hardish to find, and expensive) but neither really fit the bill. I have an EX Model Gunperry, but that’s just overkill. Then, this year, Bandai saved me! They came out with the Base Jabber from Unicorn (and Zeta, and ZZ, incidentally)

The Base Jabber is a flying platform known as a “Sub Flight System” that can carry MSs in the atmosphere. It is basically a sled that the MS rides to battle, thereby reducing transport time and saving fuel/energy. The best part about it is that in order to carry an MS, the Base Jabber is, essentially, a big, flat, flying plate. Sounds like a good candidate for a sled, eh?

The Base Jabber kit is very simple. It is beautifully laid out and is designed to be assembled all at once. You can literally get everything on this kit done and stick it all together at the end. I only had to use my patented “cheater seam” a little bit at the junction of the top and bottom halves of the ‘fuselage’.

The detail on the Base Jabber’s airframe is nice; there are some vents to add a suitably ‘workhorse’ look to it, and the engine nozzles and intakes have a very ‘industrial’ flare to them. The most detail is on the load floor, both on the top (where the MS normally rides) and on the bottom, where the lift jets are.  The four landing skids are also nicely detailed with hydraulic cylinders and hinge points cleanly moulded.

The fit is awesome and the part count is low, which contributed to the Base Jabber being one of the fastest-finished kits I’ve ever built. I did it in 20 days, but that’s working at it less than an hour a day, on average.

Here you can see some of the intake and vent detail, including the small vents near the MS “handles” and the pilot’s cabin windows.

There’s very little in the way of modifications that I had to make to the Base Jabber to make it into the Sled Jabber. The main thing was the bottom of the pilot’s cabin; it didn’t have a floor! It was just hollow, framed plastic. That was uncharacteristically lame for Bandai, so I glued a bit of sheet styrene on there, sanded it down and re-carved the seam line for outlining purposes. Voila, problem solved!

I also left the gun off.  I mean, it’s Christmas, what kind of Santa has an armed sled? (Well, okay, the one on Futurama does, but BESIDES him?) To fill the hole, I just glued a spare airplane tire (1/72, I think) over the hole. Once painted in metal shades, it looked “techish” enough to work. 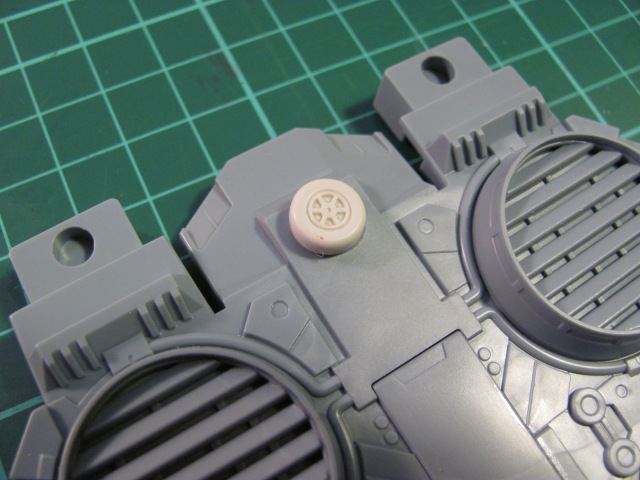 Here you can see the spare airplane wheel glued over the gun’s attachment hole. No paint on there at this point. 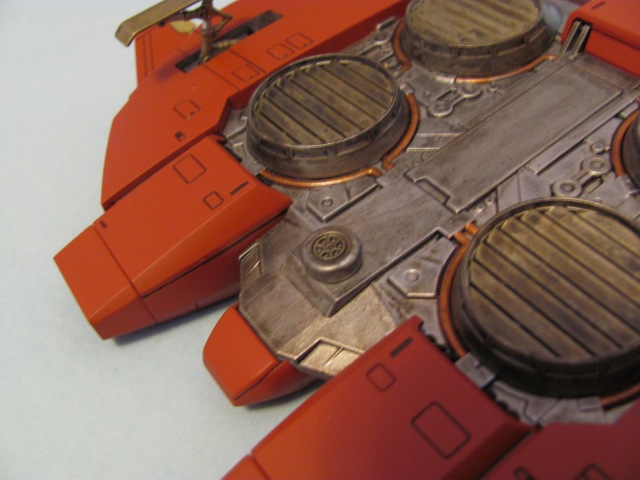 Now painted, you can see that the wheel blends in very nicely with the rest of the technical-looking “greeblies” on the underside. Take note of the cockpit underside, too. that was just open framework before I fixed it. Looks much better now.

I painted the Sled in Polyscale ASTF Red, because it was a little bit browner than Santa, so it would be a bit different in the display. I also did the load floor in a darker colour; it was a maroon mix, made from several different colours years ago, so I don’t know what it was.  I picked out the detail on the load floor with a darkened wash made from a bit of black, a bit of the maroon, some water and a touch of Future. 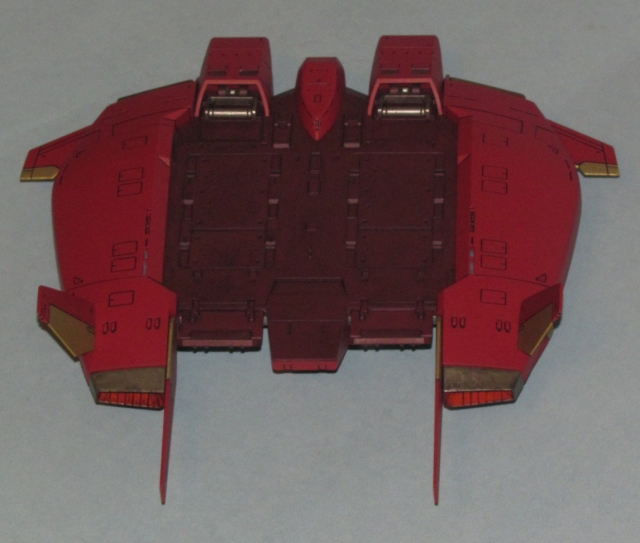 These two views give you a good feel for the difference in colour between the fueselage and load floor. Note the gold trim and Jet Exhaust nozzles.

Even though the bottom is entirely one piece, it is possible to paint the different pieces in different colours, thereby separating them. I painted this part in various Model Master Acrylic metal shades. I used Steel, Aluminum and Gunmetal, as well as some Tamiya Copper for the piping. I washed it in Devlan Brown from Citadel, and a homemade black wash. However, it is interesting to note that the Future in my homemade wash actually pulled up the Citadel wash in a few spots, so it seems it’s best to apply the Citadel last.

I did the trim on the control surfaces in gold, but the intake lips and skids in brass, to match the intakes on the Santa Gundam and Reindeer B’Cue.

The entire kit was coated in Delta Ceramcoat Matte varnish at the end of it all.

For better or worse, Santa is always associated with presents. I mean, what’s the point of having a sled if you aren’t going to load it up with loot, right? The Sled Jabber is no exception. To get this thing in the full Christmas spirit, I needed some presents. Thank goodness for Michael’s Arts and Crafts store; they had little pre-made, foil-wrapped presents for sale! Why? I think they were supposed to be ornaments for little Christmas trees.

These presents come in several different sizes, so I got one pack of the biggest ones, and one pack of the next size up. I bought them even before I had the Sled Jabber made, so I wasn’t sure how they would fit, but I was very pleased to see that the load floor was just about perfectly sized for three big presents across, or five small ones! With the Sled Jabber finished, I tried laying the presents on there to complete the picture… FAIL.

The bottoms of the presents weren’t level, and they sat crookedly and haphazardly on the deck. This looked terrible. Then I realized that if the Federation was going to air transport cargo of this size, they’d likely use standardized pallets. So, I found some balsa wood left over from a long, long time ago, and made some. It turned out that a standard pallet would fit either three big presents, or ten of the small ones!

This is how the pallets look before being loaded with presents. Not bad for a quick build!

I sanded the pallets down nice and flush, and put little stringers along the bottom, both for support and for realism’s sake. I used the Devlan Brown wash to bring out the grain in the light balsa, and also to darken it up a bit. To hold the presents on the pallets, I pushed straight pins up through from the bottom, into the presents (which are Styrofoam inside). I put a dab of CA on the pin, too, to guarantee it would hold. To complete the picture, I CA’ed some black thread over the presents to look like tie-down rope.

With the presents glued and pinned in place, I put the “tie-down” rope in place by CA’ing it at each end. Note, too, the stringers that make up the “feet” of the pallet. 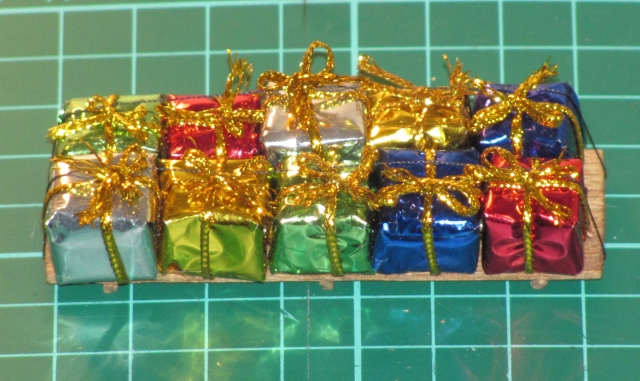 I came up with and built the pallets in the span of about 45 minutes on the day I completed the Sled Jabber. Despite the rapidity of their build, I think they look awesome and really add to the overall effect. It also greatly simplifies the transport of the Sled Jabber to club meetings and shows, should I desire to take it.

The Base Jabber kit was a timely answer to a difficult question, and built up perfectly for what I needed it for. It’s a nice kit in itself, and it’s cheap; so there’s no reason not to get one, even if you don’t have a load of presents to put on it!

Now you’re caught up to where I am on my Christmas projects! However, there’s one more step to go, but that won’t be revealed until next year! (Hint: I’m missing an elf…)

Until then, my Santa Gundam Team wishes you a Merry Christmas and Happy New Year! 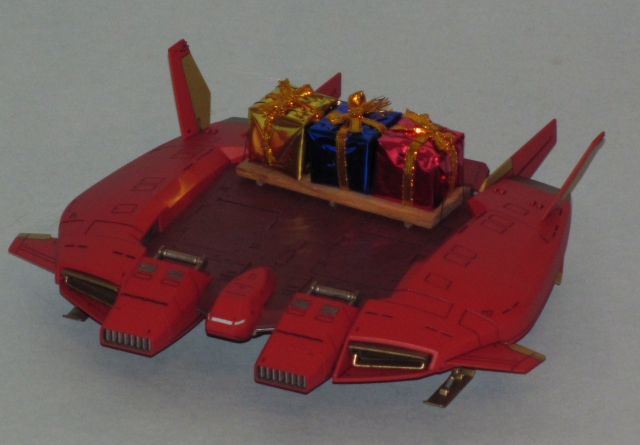 Much better! If it is better to give than receive, the Sled Jabber should be feeling pretty happy, I’d think!