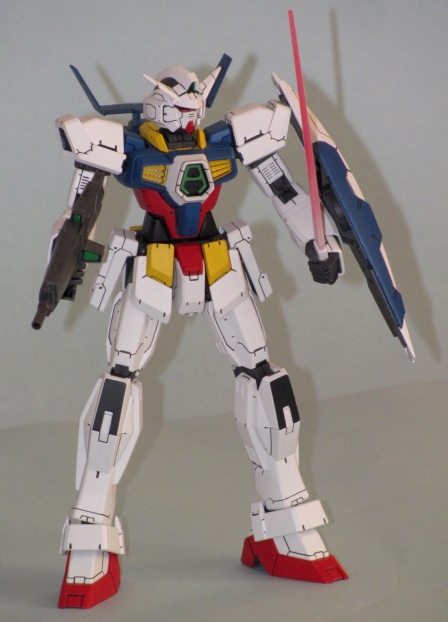 The Age-1 Normal Type is the first of a new generation of Gundams. It has a distinct design sensibility that helps to distinguish it from previous universes of Gundam suits.

The Gundam franchise is vast, encompassing many different universes. One of the newer of these is the AGE universe. As with all other recent Gundam efforts, there is an amazing number of different kits, in different grades, available for a wide range of modellers and collectors.

The HG 1/144 kits are excellent offerings, just like their HGUC cousins. However, if you want a larger scale model of the mecha from AGE, your choices are much more limited than they were when Gundam 00 was the focus of Bandai’s attention. In AGE, there’s no 1/100 scale kit line except for a few Master Grades. There aren’t as many MG’s from AGE as there have been from other series in the past, either. This likely comes from the more “kid friendly” approach that Bandai has taken with the entire franchise.

Fairly simple 1/144 kits are likely to sell more to a wider range of people than larger, more complex kits. Given the younger demographic that Bandai is targeting, it makes sense that the complexity of MGs is not something they want to invest a lot into. However, there are MGs of the main mecha from the series. The AGE-1 Normal Type is the first of these.

Just because it’s simpler doesn’t mean it isn’t detailed. This back view of the AGE-1 Normal shows the thrusters and nicely detailed vent to good effect. The arm slots are also fully drilled through.

At first look, the AGE-1 Normal Type (hereafter referred to as the “AGE-1”) looks like most other MG kits of recent times. There are quite a few parts in the box, and it’s obvious that the finished product will be of a pretty good size. There’s lots of colour, with pieces cast in red, white, blue, dark grey and yellow, with clear pink beam sabres.

The instruction booklet is also pure new-generation MG, with clear pictorial instructions and good in-action shots of the finished product. The instructions break the mech down into convenient subassemblies, so there shouldn’t be any problem for anyone to follow them and understand what’s going on, even if you’re like me and don’t read Japanese.

One thing that does seem a bit off, though, when looking at the kit, is that it’s difficult to identify exactly what frame pieces are for what. Normally, you can tell foot and leg and arm frame components apart, but it’s more difficult with the AGE-1. There’s a reason for this: the AGE-1 doesn’t have a “traditional” internal frame like all of them from the last couple of years. Instead, the internal frame is more like a bunch of boxes around which the mech is built.

Even if there’s no traditional MG frame, there’s still a good amount of detail in the upper body. Here’s the chest, with the cockpit open and the breather vents painted steel and washed with black.

For fans of the highly detailed internals usually seen on MGs, this will be a major letdown. However, for me, it wasn’t a big deal. Most of the detail on an MG is covered anyway, so the full internal frame really only gets in my way, and means I have a lot more work to do on chopping parts off the rack. With the AGE-1’s “box” system, the sprue attachment points are on places that aren’t going to show, so no major sanding is required. Less sanding = less suck, where I live.

Don’t go peeling off the armour for a look at the structure underneath! While the MG Age-1 Normal looks like any other MG kit, it goes together quite differently!

Despite the simpler inner frame, the AGE-1 still builds up very nicely. Construction is straightforward, for the most part, but for a builder more used to UC designs, the part geometry can be a little bit foreign. The most interesting part of building an MG, to me, is always getting to “dress” the inner frame. Usually, this is not an overly involved process; the armour just fits on mounting points and you’re done. In most cases, there isn’t a lot of layering, and the order of attachment is, at least somewhat, arbitrary.

NOT SO for the AGE-1!! The armour on this thing is more like a complex spatial puzzle, a Rubik’s cube of MS engineering, if you will. There is a specific order to the attachment of the armour plates, and YOU HAD BETTER FOLLOW IT! It’s almost as if Bandai was trying to see who was paying attention, or maybe trying to trick experienced people who thought they knew it all; if you think you know more about building the AGE-1 than the folks who designed it, you’re going to be brought to Earth with a crash.

All of the leg armour is like some kind of crazy 3-D jigsaw puzzle, and you better follow the instructions when putting it together! The vents are actually punched through, which is cool!

The paint scheme on the AGE-1 is pretty conventional. It is the standard “red-white-blue-yellow” of so many Gundams through the ages. The white I used is Tamiya Flat White with a very small touch of purple and blue added. This makes the paint whiter and brighter, and seems to resist yellowing. The blue is a slightly lightened version of Testors Model Master Acrylic GM Engine Block blue and the yellow is a mix. The frame bits, Dodds Rifle and hands are all painted with Rustoleum Dark Grey spray paint, and washed with a home-made black wash. This was just thinned MMA Flat Black with some Future in it. This worked even better than the Citadel washes I normally use, and is a lot cheaper, too!

The paint scheme on the Age-1 Normal isn’t very original, but it is a very nice homage, and works better than some others (Strike Gundam, for example).

The entire mech was flat coated using Delta Ceramcoat Matte varnished, and is the only part of the mech that is airbrushed, other than the beam sabre. The Sabre is one of the newer-style “square-type” with a rectangular cross-section. These are harder to get to look good because there are distinct sides to the blade. Still, the same process I always used was employed. I sprayed some white over the sabre, decreasing the intensity from the bottom until about half way up. This gives the impression that there is a “denser” cloud of energy at the base. I then oversprayed the entire sabre with Interference Violet pigment, to give a pearly-pink shine. 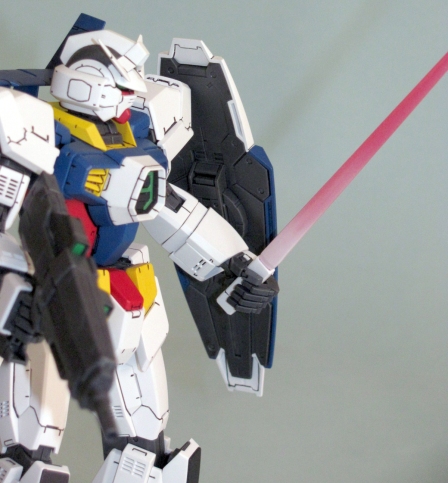 This shot clearly shows the “whiting” on the beam sabre. This technique really helps to make Beam Sabres come to life!

The AGE-1 Normal is a great kit, and a good looking mech to boot.  I loved the fact that the little vents on the leg and arm armour are actually vents, meaning you can see through them. It’s a bit unfortunate that there’s nothing to see, but other than that, the reduced-complexity inner frame works well.

The kit is not difficult to build, and would indeed be a good “my first Master Grade” for a modeller of younger years or lesser experience, or someone who is new to Gundam. It’s pretty difficult to mess this kit up, I’d think. Now, that having been said, it implies that you follow the order of armour attachment properly; if you don’t, you’re on your own!

There are a few things about this mech that are a bit off-putting, to some. The large “Spoiler” on the backpack isn’t that well-liked, although the mech isn’t back-heavy, amazingly enough. (And, if you wanted to do a “tuner custom” Gundam, it’s a perfect accessory!) The biggest issue is that the AGE-1’s feet are a bit small for the mech. They look a bit awkward, but more than that, they do reduce the stability of the final product. On a personal note, I also don’t like the grey patches on the head, but that’s just me.

Overall, though, the AGE-1 Normal is a great kit and a lot of fun to build. There are several flavours, too (Sparrow and Titus versions), so if you want to build it a few times, you can!

This closeup of the upper body highlights the colour separation on the AGE-1. If you look closely, you can see the steel vents from the “frame” through the yellow breathers.

The AGE’s “spoiler” is a very distinctive trait of Gundams from the AGE series. Some people like it, some don’t. I’m just impressed the kit doesn’t topple over backwards with that big a backpack and such small feet! 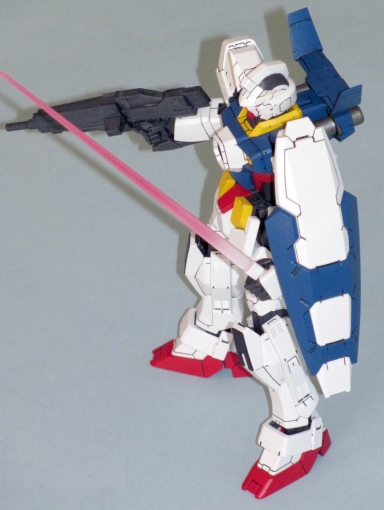 One of the AGE-1’s oddest traits is the black (well, dark grey) patches on either side of the head comb. It gives the impression that the AGE-1 is going bald!