In the early days of the jet fighter, right after WWII, there were several prevailing thoughts. One was that if a Jet was ever to be used off an aircraft carrier, it would need a straight wing. The early jets’ slow acceleration and relatively underpowered engines made getting all the lift one could essential. Another was that an all-weather and night fighter would be a larger, heavier aircraft with multiple crew and engines. This was because early radars were large, heavy and needed one person dedicated just to running them.

When you put these ideas together, you realize that an early naval night fighter would be a big, square box of an affair. Well, that’s exactly what the Douglas Skyknight was. The Skyknight looks a lot like what a kid would draw if you asked him or her to draw a plane. It has straight wings and a thick body, with a pointy nose and square tail. In fact, it would likely make an awesome Styrofoam glider; there’s a project for you for the summer!

Because of this rather unsexy shape, the Skyknight did not capture the imagination of the population at large. It wasn’t as sleek or racy as the Skyray or F-86. Since it operated at night, it was much duller; usually Skyknights were black or dark blue. Because of this, the Skyknight is not an airplane that has seen a lot of incarnations in plastic. However, that’s just looking at the surface. We all know that it’s heart, what’s inside, that counts, right? When it comes to accomplishments, the Skyknight is no slouch, having served well in Korea as well as an EW platform (EF-10) in the earlier part of the Vietnam Conflict.

Thankfully, Matchbox, that sadly-long-gone purveyor of oddball plastic kits took it upon themselves to make sure that the Skyknight did not get completely forgotten. Matchbox issued a 1/72 Skyknight in 1988. (Some sites say 1985, but my instructions show 1988.) It was one of the later Matchbox kits, proving that they kept on giving us obscure stuff right to the end! There is also now the Sword 1/72 Skyknight, so those who can’t find the Matchbox might be able to find it. However, Sword kits can be hard to find too, and since the Matchbox wasn’t ever reissued like the Wellesley was (I don’t think, at least) finding either could be a pain!

The box is a typical late ‘80s Matchbox box, with the oh-so-Tonka-van “sunset stripes” boldly emblazoned under the box art. The art itself shows one of the orange, white and black training aircraft that you can build using the kit. Like the plane itself, the art is nothing too racy or action-packed. The Skyknight is shown simply flying gently through the skies. Below the sunset stripe is the large ‘Matchbox’ label and the F3D-2 callout. You can’t mistake what this thing is, no matter how hard you might try! The end flaps show the same picture, without background, against the sunset stripes and identify this kit as PK-134. 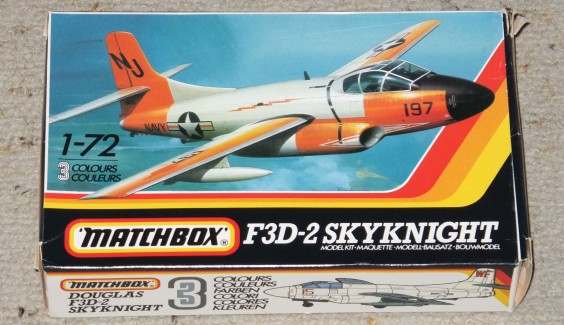 You have to love Matchbox’s flair for colour! The artwork is nice, but not overly exciting, like the Skyknight itself!

The back of the box shows the full-colour painting plan. From this, you see that the folks at Matchbox have done their usual thing of giving the modeller two choices of markings. However, unlike some kits where the paint schemes are similar, the two given here are wildly different! The top one is the trainer from the box art, an F3D-2T2 from VF-121, circa 1958. Gotta love the detail just in the identification of not only the unit, but the timeframe, too! This is the high-viz scheme. For people looking to do a Korean War aircraft, you can build the bottom one, which is also an F3D-2T2 of VMF(N)-513, a Marines unit at K6 airfield in August 1953. 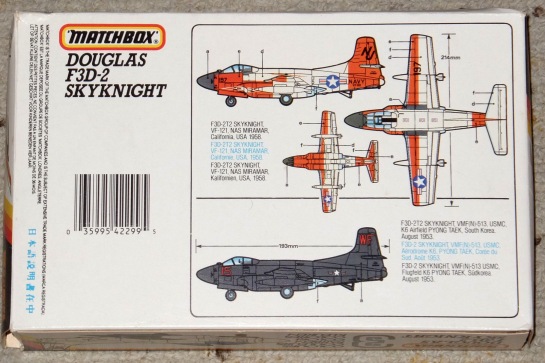 The two colour choices are very different, which is great! Notice the detail in the colour schemes’ history!

As a note, I always find this interesting about Matchbox kits: They were doing full-colour paint plans AGES before anyone else I know. Just now we’re seeing separate paint plans in some kits. It took a while for Trumpeter to catch up eh? Too bad Tamiya and Hasegawa have still yet to do so!

As proudly proclaimed on the box, the model comes moulded in three colours! These are white, light grey and dark grey. Unfortunately, looking at the illustration on the side of the box, if you were to build it unpainted, it really wouldn’t look right at all. This is one time that the colour choice is pretty poor on Matchbox’s part. Of course, if you’re not going to paint it anyway, you likely don’t care, and if you are going to paint it, you don’t have to worry!

Uh… no. The unpainted Skyknight is not really good for anything, except arctic work, maybe. The choices of colour on Matchbox’s part were poor, I’d say.

The kit itself is typical Matchbox fare. It is a simple model with nearly everything given to you in halves. There’s not a lot of finesse anywhere, you just glue the halves together and voila! As expected, the cockpit is very Spartan, and consists of seats and an instrument panel. Sadly, there’s no decal for the instrument panel, but I guess they figure no one will really notice. If you like to superdetail, then this is the place for you to go nuts.

Also up to normal Matchbox standards, the landing gear bays are too shallow and devoid of detail. Matchbox’s goal was to provide a model that outwardly represented a given plane, not to make a perfect-in-every-detail model. It allowed them to keep costs down and produce some of the interesting stuff they gave us. Personally, I’m okay with that, and my ever-growing stash of ‘Boxes is testament to that. I’d rather have passable and simple examples of obscure machines than perfect but complicated replicas of the famous and everyday ones. That’s just me, though; you have to make that call yourself.

Now, one thing that IS cool, though, is that the Skyknight kit does allow you to fold the wings! So, if you want to build your F3D all tucked up for storage, or as part of a diorama, you have that option! This is ingeniously achieved through a set of optional pins to allow the outer wings to be installed at the proper angle for folding. Now, there’s NO detail on the wing rib faces, so that’s definitely a good place for some effort to be focused, but it’s still a neat trick. The wings don’t FOLD though, like on the old Monogram Devastator, so there’s no actuating wing hinges or unrealistic hinge bulges to worry about. See, Matchbox is taking care of you! 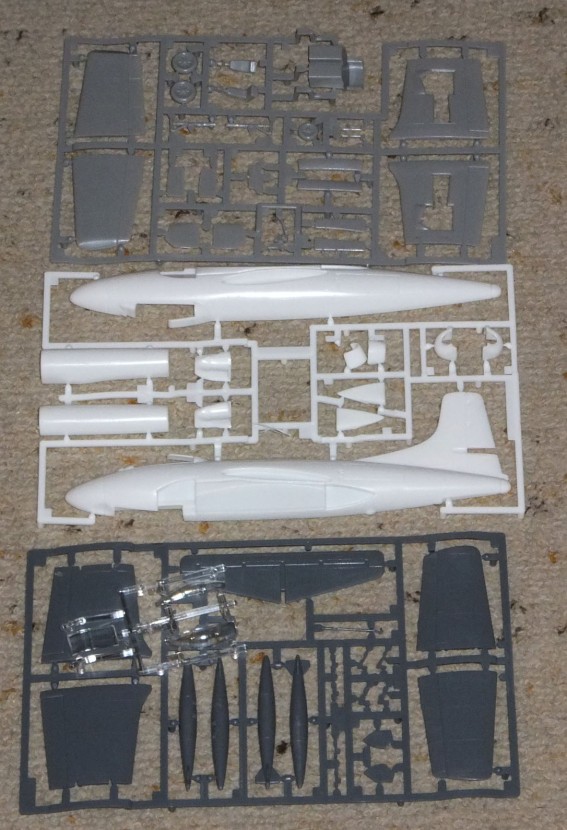 Here’s what you get in the box; three sprues of plastic and three clear canopy bits. Not a lot to see, but what’s there is at least passable! You can see how the wings are in quarters, to do the wing fold if you desire.

There are, however, very fine raised panel lines on the fuselage and wings. These will either have to be handled very carefully, sanded off, or, if you’re serious about it, rescribed. I have no idea if they’re correct, either. Matchbox sometimes just puts on lines where it wants to, so you’re best to find some good plans or drawings before you start scribing the airframe!

The decals in my kit were in perfect shape when I bought it about 8 years ago, and they still are. Thanks to the tissue paper and their being folded into the instructions, the ravages of time have been kept at bay. The decals are simple, but effective, including aircraft call letters and insignia. There aren’t loads of stencils, so if you want some, you’re going to have to get them yourself. The decals seem to be in register, but I can’t help but wonder how the red is going to fare over the all-black of the Marines machine. 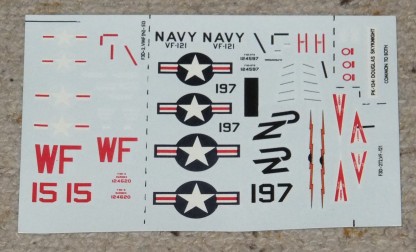 Here’s the decal sheet in all its glory. If you build it black, and can’t go back, you’ll have some nice spare “Stars and Bars”!

The instructions are straightforward, as is the kit. There’s not much to worry about, except the optional wing fold. The only difficult part will be the cockpit, because it’s in three pieces! The Instructions show the three bits just “going on” to the airframe, but I remain skeptical.  Granted, the framing is heavy, but Matchbox canopies don’t always fit perfectly, so I think this is going to be a bit of work. Other than that, the instructions are easily followed by anyone, and are far superior to Revell Germany instructions, at least! 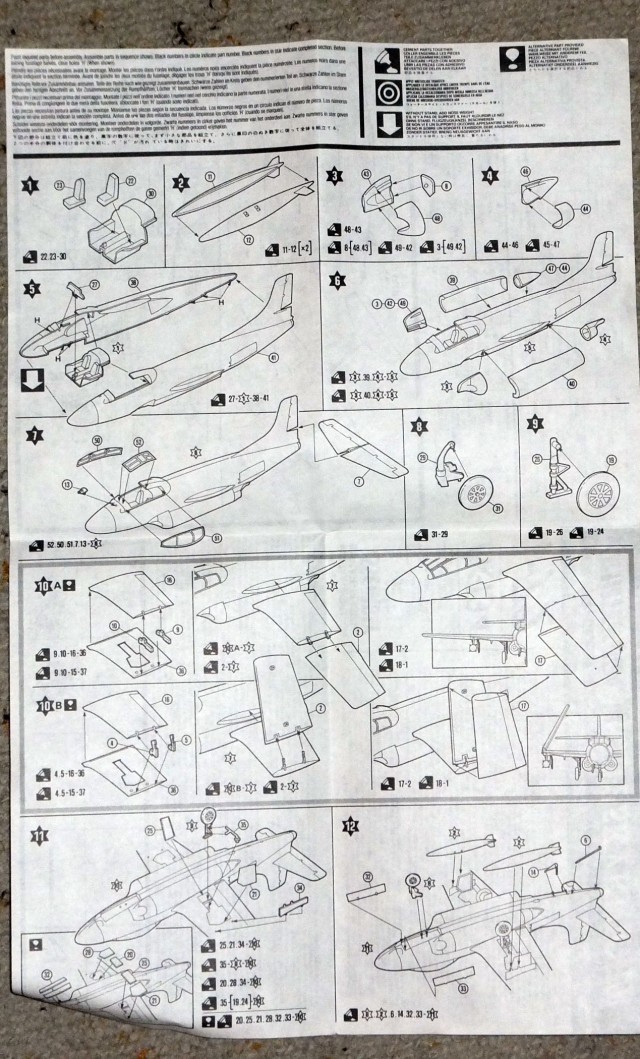 Keep it simple, stupid! Matchbox instructions adhere to the KISS principle very closely, as you can see here. Check how the wing fold is done!

Once again, Matchbox gave us a nice kit of an obscure aircraft, and one that needs to be kitted. They Skyknight was an important aircraft, and should be in the collection of any cold war, night fighter or naval aircraft enthusiast. With the new Sword kit available, the value of the Matchbox Skyknight as a kit might be reduced, but for the longest time, this model was the only one in town when it came to injection moulded F3Ds.

As an aside, I find it interesting to see that Sword has, of late, taken to issuing kits of planes that only Matchbox used to make. First there was the Wellesley, now the Skyknight. What’s next, a Heyford? Hmm…

Like all Matchboxes, the kit is simple enough that a young builder can assemble it straight away and likely without much in the way of assistance or supervision. Even first or second-time builders will be able to handle it, although the finicky-locking cockpit canopy and wing fold might present a bit of an issue for those who are still green in the hobby. For anyone who’s built a Matchbox before, though, there are no surprises (good or bad) here.

I expect this will be a traditional build, in that there will be a tonne of work needed to get all the seams smooth and all the pieces to mate up nicely, but I am sure it will be worth it in the end. I would recommend this kit, but I’m a big Matchbox booster, so I’m biased. Still, I think it’s a worthwhile kit to have in your collection, and would recommend it for serious modellers who will give it the time it deserves!