The box is kind of lame, and it doesn’t really make you want to buy the kit. However, the SVO’s unique styling certainly jumps out at you!

The Mustang name is a very storied and well-established one. Since the debut of the Stang as a Falcon-based, youth-oriented, somewhat-sporty car in the 1964.5 model year, the car has shown great staying power and engendered a brand loyalty all out of proportion with its humble beginnings. Through the ages, the Mustang has constantly evolved, going from tarted-up compact to overpowered street dragster and, like a Transformers toy, back again.

By the mid 1980’s, the Stang had long left the territory of serious muscle-type car; long gone were Boss 302 and Boss 429 days. The times were no longer right for a Stang that gulped gas and belched horsepower. However, gone too were the days of the Mustang II, where the name Mustang was attached to gutless personal luxury cars and embarrassingly flamboyant but equally lethargic “performance” versions. Now, Mustang was somewhere in the middle. It was still a rear-drive car, sharing the Fox platform with a number of other Fords, namely the Futura and LTD. The Mustang was more refined than it had been, and had greater potential than a decade before, but there was something more that was needed.

Turbocharging had been seen as a potential boost (yes, pun intended) to the Mustang since the late 1970’s, and there had already been turbo Stangs running a 4-cylinder turbo engine. However, Ford wanted to create something with special around this powerplant; something that would be distinct and herald in a new era of both performance and refinement. They wanted something with European flair and American sensibilities. They put their Special Vehicle Operations group on the job, and the result was the SVO Mustang.

When it debuted in 1984, the SVO Mustang (henceforth just called the SVO) was certainly different. Model-specific headlights, hood, hood scoop, tail lights and a double-rear wing were the first clues. The wheels were different and there were many mechanical differences throughout. There was a lot of premium equipment as well, including better shocks, stabilizers; leather-wrapped wheel, leather seats and A/C were standard. Clearly, the SVO was designed to be an “import fighter” and take on the BMW sports coupes that were gaining popularity.

Due to the radical nature of the car’s styling (which is still something of a polarizing issue among enthusiasts), the SVO cut a distinctive figure on the roads, and was the center of attention for the automotive press. Not surprising, then that model companies of the day were eager to make a kit of this newest, “ultimate” Stang. MPC was out there with a kit in 1984, the SVO’s first year. However, Monogram joined the party with their slightly larger 1/25 offering in 1985.  Other than scale, the big difference between the kits was in the headlights. The Monogram has the flush headlight lenses of the later 1985 models, as compared to the oddly “notchy” headlight setup of the ‘84’s.

As can be clearly seen, the current trend in the model industry (especially the model car industry) is to reissue old kits, many of which haven’t seen the light of day for decades. One such kit is the Monogram SVO. Reissued under the less-than-appropriate “Streetburner” label, the new release of the SVO is currently the only way to get a new model of this car; the MPC has never been reissued, at least not to my knowledge!

Despite being much newer, the SVO’s “Streetburner” box looks dated. The attitude it projects is purely 1990’s, with an odd “spraypaint” font for the Streetburner name, and some shadowy “dragway Christmas tree” graphics behind it. Oh yeah, there’s a rather uninspiring photo of a built model on the box too. The box makes the statement that “It gets mean when the light goes green!”. This is rather inappropriate, given that the SVO was supposed to be about handling and sophistication, not brute force. The SVO was a road car, not a dragster, so trying to sell a kit on this point just seems kind of silly.

There are a couple of pictures of a stock and a two-view of a “Custom” version on the side of the box, and stats on the other. Overall, if the SVO was not a car someone wanted to buy a kit of, I don’t see this box doing much to change that. However, if you DO want an SVO kit (say to go with your “loser and oddball” collection) then you’ll buy it regardless of the box.

The side of the box with pictures doesn’t show you much. No interior shots or back end shots are given. the other side has stats on it.

Unfortunately, the box doesn’t exude the same kind of retro-appeal as so many other re-release boxes, and I really think that it hurts the kit’s saleability.

Upon opening the box, you are greeted by a number of white plastic parts. I think the original might have been moulded in red, so having the kit in white is a nice improvement. It is a standard Monogram kit, meaning that there is a full engine and interior, with an opening hood and closed doors and trunk. There is a decal sheet with some door graphics and racing-type decals and it is fairly large for a car’s decal sheet. There is a rack of chrome that has the distinctive wheels as well as a bunch of, as usual inappropriately, chromed engine pieces.

This car comes with a pretty big decal sheet, almost all of which are for the custom version. The Custom decals proclaim that this car aims for 72st place! WTF?

Unlike some MPCs and earlier kits, the interior is the familiar “bucket” style, and while it doesn’t look as nice as an MPC as far as carpeting texture goes, it still looks pretty good. It’s better than the interiors in Tamiya car kits, at least! The door panels are quite devoid of detail, mind you, which is unfortunate.

The engine is the 2.3L turbocharged 4-cylinder, and it is reproduced in fairly good detail. I can’t tell for sure if this is the same engine as in the 1987 T-Bird Turbo Coupe or not, but I would put some money on it. The engine looks pretty well-detailed and the turbo setup looks nicely done. Given that the Turbo is indeed the heart of the car, this is a good thing, although I think the car looks better hood-down.

Here’s what’s in the semi-lame box. It’s a nice kit, with excellent packing. The glass is bagged separately (learn that trick, MPC!) and so is the body.

While real SVOs could have sunroofs, the model is a hard-roofed version. This means you can only see the interior through the open side windows, but that’s more or less standard. Since all SVOs had charcoal grey leather, there won’t be a lot to see in there anyway!

The parts all look pretty good, despite the age of the moulds. There’s a bit of flash in spots, and the body has a few seams on it that will need to be cleaned up, but barring that, there’s not much that should really present a problem on this kit. One interesting thing will be to see how the double-wing spoiler fits on. The Monogram 1987 GTA’s wrap-around spoiler was not a particularly good fit; I hope they got it right on this car!

This closeup of the Chassis clearly shows the level of detail found there. it’s a nice chassis, just asking for some Sage Green overspray. Wait… did you say green?

As expected, the most disappointing part of the kit is the engine bay. In typical Monogram fashion, they accessories bolted to the firewall and wheel wells are not as well defined as they ought to be. Just as with the aforementioned ’87 GTA, things like the master cylinder are moulded right into the kit, and instead of terminating cleanly and deliberately, they just ooze down the engine bay walls. I really hate this: MPC had it right with separate parts; how come these guys couldn’t get it right? 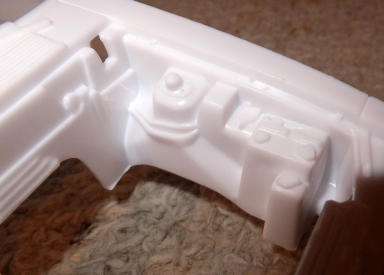 Fail. This is how NOT to mould engine bay accessories. Any marks for packaging and chassis detail just got thrown out the window.

There’s not a lot to say about the instructions. They are simple to follow and quite clear, being typical of Monogram’s car kits. The painting plan is large, but doesn’t tell you too much you can’t see from the box lid. Of course the list of available colours on an SVO was quite short, so there’s not a lot to choose from. However, there’s one thing I’ve learned in my hunt for SVO pics, and that is that there was a small number (50?) that were produced for Hertz rent-a-car. These were specially painted, and carried a Bullit-esque green colour scheme, with distinctive Gunship Grey accents. This means the wings, mouldings and other black pieces are actually grey. This is a rare car, and was only offered in 1985, I think.

Seen better, seen worse. The instructions are nice, but they show that the engine could have more separate parts.

Now, how do you think I’m going to paint this particular kit?

Overall, this is a nice kit of a quirky and distinctive car from an era in which American performance cars were still trying to find a proper, new identity in the climate of front-wheel-drive econoboxes and demands for lighter, nimbler, more miserly vehicles. For that alone, it’s an interesting piece. The kit is a good representation of the car, although I’d personally rather have the MPC, just because I prefer their kits.

The detail on this kit is quite good in spots, and largely passable the rest of the time, and it should make a good replica, although it’s not as fine a kit as some cars I’ve built. It’s a good kit for both Mustang enthusiasts and those with a taste for the offbeat, though, that’s for sure. The model doesn’t look too hard, so a beginner should be able to make a half-decent glue-bomb out of it without supervision, but the white plastic will make painting by hand difficult and likely not all that rewarding.

I’d recommend this kit from both an apparent-construction, as well as subject matter, point of view. For its time, this car was pretty hot spit, and this model did what it could to celebrate that innovation.