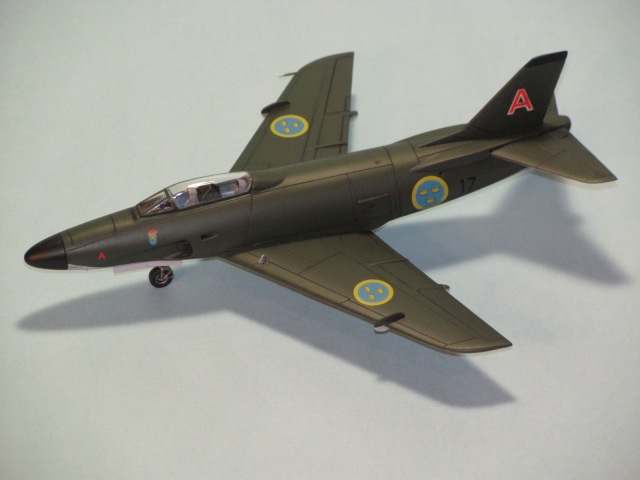 This is the finished Heller Lansen in 1/72. An attractive, if not somewhat dated, kit of a similarly attractive but dated aircraft!

If it’s one thing I like, it’s the weird or obscure stuff. Unfortunately, in many cases, this means that apart from expensive (and often troublesome) resin or short-run kits, it isn’t possible to get a model of what I want.

Thankfully, though, that wasn’t always the case. Back in the 1960’s and 1970’s there were several companies (mostly European) that were making kits of more esoteric subjects. Chief among these were Matchbox and Heller. Both of these companies produced 1/72 models of things that haven’t been kitted since, including the two-seat BAC Lightning, two-seat Hawker Hunter, two-seat Mirage, A-29 Tunnan and A-32 Lansen. There are many others in this list too, but those are some of the first of my oddball collection that come to mind.

The Lansen was only ever made by Heller in 1/72 (to my knowledge) until the recent 1/48 came out from Tarangus. Like all old Heller kits, it is not the best model ever made, but it isn’t all that bad, either. The old Heller and Matchbox kits from that era get an unfairly bad reputation; as long as you have some patience and skill, they build up just fine.

The Lansen is no exception. The moulding is pretty good, with a bit of flash, and the interior detail is minimal. However, the shape is pretty good, and there’s a lot of surface detail on the plane. Unfortunately, all panel lines are raised, so they all have to be re-etched. This means you lose all that nice surface detail, unless you want to etch it in before you sand. I didn’t bother for a lot of it, but the main lines I rescribed.

This kit can be built as either an A-32A with the cannon nose, or a reconnaissance machine with a  camera nose. The recce nose is very nice and moulded in clear, but the amount of sanding required to make pieces fit might end up  causing you some headaches. The gun part of the nose was a bad enough fit!

You can see the gun nose on this A32A from this side shot. It also emphasizes the somwhat boat-like prow of the Lansen, which in some eyes causes it to resemble a banana!

One problem is that the engine nozzle should be put in before the fuselage halves go together. However, this makes life really unpleasant, so I built a “wall” for it so I could pop it in afterwards and it would have something to rest against. A bigger problem is that the intakes have no backs, no trunks, no nuttin’! So, it’s either get creative or have a huge, hollow plane that you can look right through. Clearly, that’s a no go, so I made some intake backing plates, painted them black, and put them on the inside of the intakes. This works really well, and is a fairly simple fix for a very visible problem.

This shows the stopper I made for the intakes from the inside. I kept the boundary layer bleed open, since it’s too small to see much through it.

Here’s the stopper from the outside. Once painted black, it does a good job of being a surrogate hole, without giving you a view of the kit’s cavernous interior.

Once you get everything together, the Lansen is actually a very solid aircraft. Like most tricycle geared planes, it’s a good idea to put some weight in the nose so that it will sit flush. I didn’t measure how much I used, but some CA and Lead Shot did the trick.

Lansens were not operated in a very wide range of colour schemes. The box on this version shows bare metal, and there is a two-tone green cammo as well as a straight one colour of green over light grey. The latter is what I chose for my Lansen, not only because it suited the businesslike design of the plane quite well, but also because it would match my Swedish Mustang and my J-21 (whenever I get it done…).

While not that exciting, the Lansen’s paint scheme definitely is an asset in the low-level attack role.

I used Model Master Acrylic Dark Green over Light Ghost Grey. I masked the separation with Tamiya Tape, since the pictures I’ve seen show a sharp line. Once the paint was on, a coat of Future was used to seal the paint and get it ready for decals. I mixed up some dark green chalk pastels (darker than the paint) and brushed them on the panel lines. I did this to accentuate the lines and make it look like I pre-shaded. I did the same thing with grey pastels for the underside.

In this odd view, you can clearly see the “darkened” panel lines. It’s a more subtle effect in the other photos.

I like the powders, because they are easy to apply, easy to take off if you don’t like it (just wipe with a bit of water) and they give a ‘feathered’ edge, simulating airbrushing without the danger of ruining your paintjob if something goes wrong!

From below, the panel highlighting shows up better.

Once the pastels were nailed down with one more coat of Future, the decals were put on. I used the original kit decals to mark the aircraft. Given they were quite old, they worked very well; I was impressed. After that, I oversprayed the entire plane with very thin coat of Delta Ceramcoat Matte Indoor/Outdoor Urethane Varnish. This dries dead nuts flat. To bring the sheen up just a bit, I then gave the plane a final coat with more of the Ceramcoat, but this time added a bit of Future.

The Lansen is an old kit and it takes some work to really make it look good. However, it’s an awesome looking plane, and not one you see built very often. I am very pleased with the results of my labours, and would say that this kit is good for both beginners (who will overlook its flaws) and more experienced builders (who can correct them). However, it’s a pretty rare kit, so it might not be something a beginner can even find, now.

This view shows how old the Lansen’s design is. No hint of area ruling marred it’s rather wide fuselage!

The width of the fuselage also shows up in this head-on view! See how well the stoppers on the intakes work!

From the back; not much else to say for this one!