The stylists at Renault started it, and Solido’s bad colour choices and cheap paint finished it. The Cougar Renault 14 is seen here in all its “glory”.

Renault is not an automaker that has a lot of cachet in North America. The Dauphine was less than successful, and ruined the brand’s name for quite some time. The “Le Car” version of the Renault 5 was more successful, but it’s less-than-robust metallurgy and, to be honest, extreme ugliness, did it little favours. Indeed, combining with the failing AMC to bring out the Alliance was “three strikes, you’re out” for Renault back in the ‘80s.

Of course, in France, Renault is a household word, and I can tell you that, when I was in Germany, they seem to like the brand quite well too. Renault  has been in the business for a long time, and while it seems they can’t get  a handle on North American sensibilities, they have little problem shifting cars in the home market and those of their close neighbours.

One exception to this was the Renault 14. The 14 was first debuted in 1976, and was positioned to be a direct competitor to the first generation of VW Golf (Rabbit in North America). To this end, it was a compact hatchback, with a transversely-mounted four cylinder of 1.2 litres. capacity. These mighty mills  cranked out 60 hp whether you needed them or not. Later versions got more power, with 70hp from a 1.4L engine. Like many Renault compacts since, the engine leaned way back, leaving room under the hood for the spare tire.

Renault’s always been a bit of an odd duck, especially styling-wise, and the weirdness seems to have hit a fever pitch with the 14. It was designed to be spacious, which is laudable. We already know they saved interior room by putting the spare with the engine, so we know they were serious.  (I know it’s like the BRAT, but bloody heck, tires just don’t belong in an engine bay…) However, they chose to make the car spacious by making it, well, fat. If not fat, at least corpulent. Perhaps “cherubic” is the word I want? Suffice to say it “bulges around the waist” a bit. 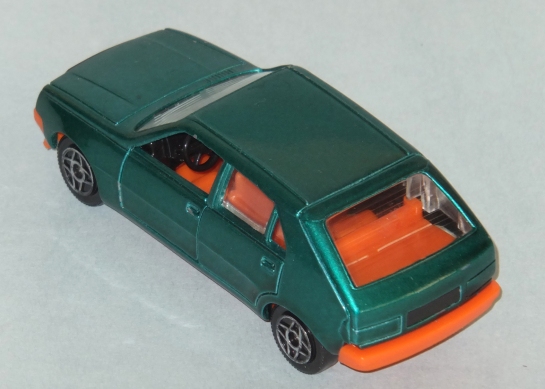 Renault’s “pear” had a bit of “baby fat” to it, that’s for sure. You can see the innate roundness of the car very well from here.

This led to an ill-advised publicity campaign that compared the already soul-less looking, relatively cheaply-made and definitely oddly-shaped car to a pear. “La Poire” it was called. As shocking as it may be, this DID NOT endear people to the pudgy little car, and the Renault 14 did not really sell all that well. Add to this that the car did suffer from terrible corrosion (apparently, the 14 was, at one time, considered the “rustiest car in Europe”) and it’s not hard to see why trying to sell these things was something of a losing battle.

Of course, given its dismal performance, terrible reputation and, to me, repulsive styling, you should not be surprised that it was something of which I badly wanted a replica. Thankfully, but unsurprisingly, Solido make a replica of the Pear in 1/43, and it was sold as part of its discount Cougar lineup.

Despite the 14’s unfortunate genesis and eventual failure (and premature disintegration, in many cases), it was hoped it would be a great success. Also, while it wasn’t the raging, Golf-killing success that had been hoped, Renault did sell 993+ thousand of the cars, which isn’t bad. Unlike the Tagora, which would be rare, the 14 would be an “everyday” car French kids would see, and thus it made sense to hype up the home-team, as it were, in 1/43.

The Cougar Renault 14 is another one of the more deluxe offerings in that it has opening doors, this is where the “luxury” stops. Like some of its stablemates, it existed in other, more nicely finished forms, than the Cougar I have. There were boxed versions with rubber tires and authentic paint colours and metal chassis. However, while those are awesome(ly horrible), the Cougar is was really gets me going! It’s the cheap-o version of the nicer replicas, almost a Dollar Store knockoff… of itself!

It’s a higher-end cheapo version, since the doors open on this one! The dash is nice in black. The bumpers in orange, though? Really?

To start with, the Cougar version of the 14 is anything BUT colour accurate. One of the most “iconic” aspects of the 14’s bland, nearly face-less approach to “style” was the front bumper. This wasn’t even chromed, it was just silver-coloured. For some reason, it just jumps out as a trademark for the car, since there’s little else to distinguish it from the front. The way it fits with the odd contours just kinda worked, in an “epic fail” kinda way. However, this particular version of the Cougar 14 has the chassis, and interior, moulded in a very, very bright orange. This means that the bumpers are similarly lurid.  Thus, one doesn’t get the full impact of the cheapness and boredom that so solidly epitomized the 14.

Of course, if the rest of the car was also orange, then maybe there’d be some chance for some horrible Euro-monochrome hate to be generated. But, not this time! The body of the 14 is done in a weird teal colour. The finish is reminiscent of the old Hot Wheels Spectraflame paint from the early days of that line, actually. So, then, we have a spectraflame teal pear on an orange chassis. Yikes!!! Thankfully, the grille and dashboard are black, so there’s some restraint in here.

The general blandness of the car still shows though despite the bumper and interior colour being one of the worst-possible choices.

Sadly, the quality on the Cougar 14 is right on par with the real thing, and that’s not a good way to be. For whatever reasons, this model is very much cheaper and rougher than the other Cougars. The paint, first and foremost, is thin and cheap. It’s also “runny”, meaning you can see where the paint as run or pooled after application. This is some noobs-level stuff that every modeller has done, but tries to avoid. However, this isn’t a hand-made model, this is a mass-produced toy, and you’d be forgiven for expecting more. You won’t get it, I guess, but you should expect it…

Look at how that paint puddles on the rear door and the tail light. Did a 5-year-old paint this with over-thinned potter’s glaze?

While the paintwork appears to have been applied by the oft-striking French labour force after a three-wine lunch, that’s not where the quality issues end. I figure there must have been some mould damage to the model at some point, because the seam lines are bad, but there’s also just a gob or two of random metal on the rear corners! Where the tail lights and hatch meet the body you just get random pukes of extra material! What the heck? Of course, they only show up more due to the shoddy paint work.

Look at those blobs of metal on the rear fender. Is that one a gas cap? Looks too irregular to me. The rest of the mould lines aren’t great, either.

The interior is simple, and orange (as I said) but the opening doors are cool. The wheels are the generic Cougar wheels on two metal axles. Amazingly, the glass work is quite good, and there are windshield wipers and a rearview mirror moulded into the windscreen. The headlights are also clear, which is a nice touch. As usual, no tail lights are painted separately, nor are there any indicators picked out anywhere. This isn’t a Dinky Toy or a Green Light, so don’t get picky!

What amazed me the most is how small the car is! I mean, it looks like a French Chevette (and it more-or-less is) but at 1/43 it’s tough for me to feel what size the real thing ought to be. That’s where my trusty 1/43 ’79 Trans Am comes in handy! If there’s one thing I know the size of, it’s a Gen 2.4 Trans Am. Thus, the T/A is my yardstick against which all others are measured. Putting the 14 beside it really drove one point home: This is one small pear. It’s a family car that’s not even as long as the T/A’s front tire, when put back bumper to back bumper with the Poncho. Yowza! Amazingly, the T/A and the 14 both seem to have the same distance from the back of the rear seat to the end of the car, meaning both have similarly sized trunks. Given the T/A is often criticized for lack of cargo capacity (a few 24s of beer is all that fits in there, really), this doesn’t bode well for the 14. Oh well, it’s not like you’d want to go far in the Renault anyway… 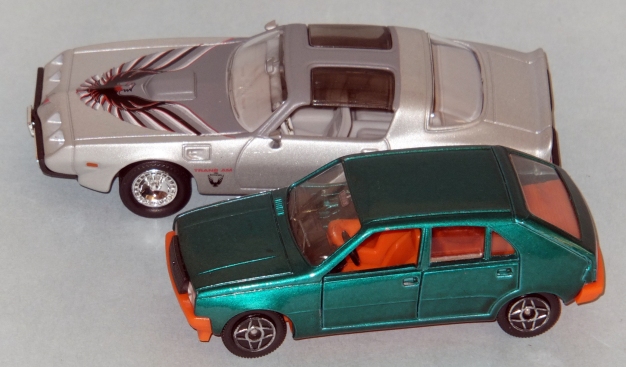 “Us” vs. “Them”. We got the Trans Am at the same time they got the 14.  Stylistically and size-wise, the poor little “Pear” is literally no match for my favourite car ever.

I love the Renault 14 because it’s really a poster child for why I generally dislike European cars of this era. Small, ugly and gutless, the real Renault typifies all the things that are wrong with cars in general, I feel. They should be fun to drive, have some power and style and have decent build quality. That the Renault 14 fails at all of these makes it something to be reviled. It is the exception that proves the rule.

Given it’s less-than-pedestrian (meaning, I supposed, you’d be better off walking?) nature, replicas of the 14 aren’t easy to find outside of France, or at least Europe. That this wheezing, chubby failure of a car should be available as a cheap-quality toy, IN CANADA, is pretty darned cool. That I have one, in such atypically vibrant colours, to adorn my display shelves is cooler by far.

While a replica of the Renault 14 is certainly not something most will lust after, it’s definitely high on my list of “gotta have” automotive failures. I guess I love it in an ironic way, maybe. Regardless, if you do like weird cars, awkward styling or just something that screams “I’m weird!” from a shelf, the little Solido Cougar version is definitely for you!